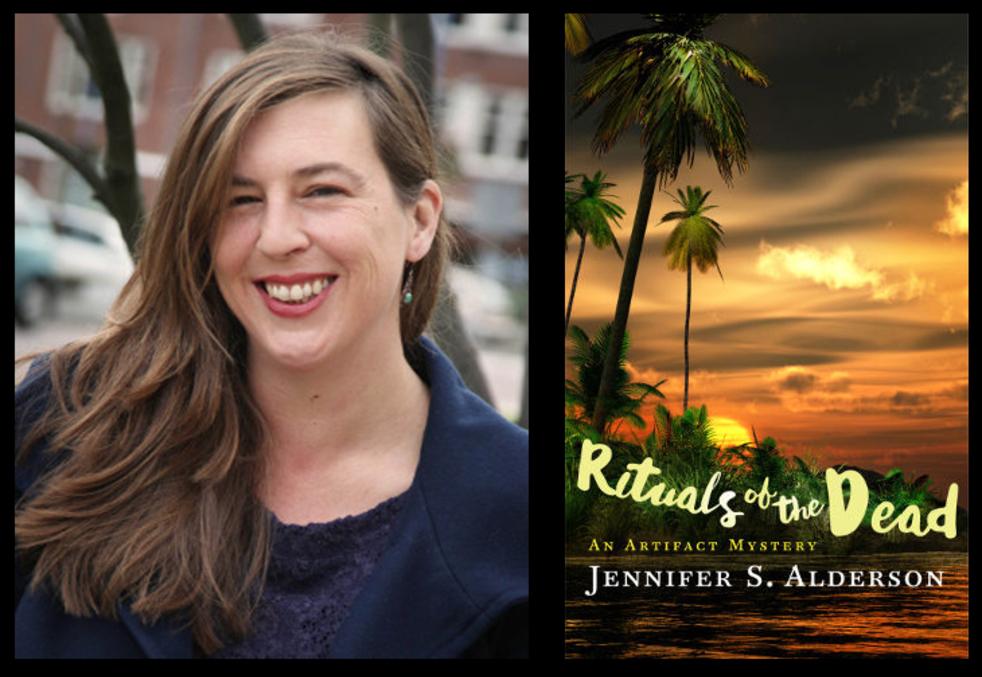 The Writers' Wing would like to welcome its next inmate, thriller writer, Jennifer S. Alderson

Jennifer S. Alderson was born in San Francisco, raised in Seattle and currently lives in Amsterdam. Her love of travel, art and culture inspires her on-going mystery series, the Adventures of Zelda Richardson. Her background in journalism, multimedia development and art history enriches her novels.

In Down and Outin Kathmandu, Zelda gets entangled with a gang of smugglers whose Thai leader believes she’s stolen his diamonds. The Lover’s Portrait is an award-winning “whodunit?” about Nazi-looted artwork that transports readers to wartime and present-day Amsterdam. Art, religion, and anthropology collide in Rituals of the Dead, a thrilling artifact mystery set in Dutch New Guinea (now Papua) and the Netherlands. Her travelogue – Notes of a Naive Traveler – is a must-read for those interested in traveling to Nepal and Thailand. Learn more about Jennifer and her books on her website: http://www.jennifersalderson.com/.

Rituals of the Dead: An Artifact Mystery

Art history student Zelda Richardson is working at the Tropenmuseum in Amsterdam on an exhibition of bis poles from the Asmat region of Papua – the same area where a famous American anthropologist disappeared in 1962. When his journal is found inside one of the bis poles, Zelda is tasked with finding out more about the man’s last days and his connection to these ritual objects.

Zelda is pulled into a world of shady anthropologists, headhunters, missionaries, art collectors, and smugglers – where the only certainty is that sins of the past are never fully erased.

Join Zelda as she grapples with the anthropologist’s mysterious disappearance fifty years earlier, and a present-day murderer who will do anything to prevent her from discovering the truth.

Rituals of the Dead is available as pre-order on Amazon, iBooks, Kobo, Barnes & Noble NOOK, Google Play, and Smashwords.

Donna Leon. Not only because she is an incredible author, but also because she is a longtime American expat. I have so many questions about how her life and long career. How does she stay inspired to create engaging, interesting mysteries set in the same small city? Where does she find her inspiration? And after so many years as an expat, does she still consider herself an American? Does she think she could have written her Commissario Brunetti novels if she had stayed in America? Why did she move from Venice to Switzerland? I bet she would want to switch cells quite quickly.

1. Alex Garland’snovel The Beach is the reason I wrote my first book, Down and Out in Kathmandu. It made me realize travel fiction could be thrilling, as well as convey a strong sense of place. I have not re-read it in years. This would be a great opportunity.

2. Any book by Janet Evanovich would do. Her protagonist Stephanie Plum is such a sassy personality. I love the witty banter between the cast of characters as well as the wacky plots. That might take my mind off confinement.

3. Any of Donn Leon’s twenty-seven (and counting) mysteries set in Venice and starring Commissario Guido Brunetti would bring welcome relief. And her descriptions of Venice are wonderful; I always feel as if I’m walking along the canals with her characters. Considering this is one of my favorite cities to visit, I truly enjoy reading her work!

4. Ultimate Spy: Inside the Secret World of Espionage by H. Keith Melton might help me think up a way to breakout.

Nick Mayfield, the star of my latest thriller, Rituals of the Dead. He could entertain me with stories about his intense adventures in Dutch New Guinea and pampered life in a New York penthouse. Captivating travel stories are the next best thing to going on holiday.

Now can you let me out of here?

Tracking down Jennifer S. Alderson after her escape: