Tracking down ​Len Boswell after his escape:

The Writers' Wing would like to welcome its next inmate, mystery author Len Boswell.

Len is  the author of three mysteries, including Skeleton: A Bare Bones Mystery, Flicker: A Paranormal Mystery, and his most recent offering, A Grave Misunderstanding (Black Rose, 2017). He also has a fantasy in the works, Barnum’s Angel, which is set in nineteenth century London.

Douglas Adams, for two reasons. First, we share a similar writing style and sense of humor, particularly when it comes to word play. Second, his book Dirk Gently’s Holistic Detective Agency was the partial inspiration for my most recent book, A Grave Misunderstanding. That and a stray thought I couldn’t resist: what if I wrote a locked-room mystery with a distinct twist, namely, leaving the murder victim outside the room while filling the locked room with all the prime suspects?

One Hundred Years of Solitude, by Gabriel García Márquez. I love magical realism, and the first sentence just pulls you into his world.

Second, All the Pretty Horses, by Cormac McCarthy. I think McCarthy is one of the best writers clacking away at the keys today, and this book includes a long, breathtaking sentence describing horses running wild across the plains that could stand alone as a work of art.

Third, Bleak House, by Charles Dickens. One of the characters in my forthcoming book, Barnum’s Angel, is Inspector Charles Frederick Field, the real-life inspiration for Dickens’ Inspector Bucket. Reading how Dickens described and gave life to Bucket gave me a new-found respect for his writing skills.

Finally, one of my own books, Santa Takes a Tumble, a memoir that includes twelve funny/poignant stories about Christmas in the 1950s. I’m pretty sure I could come up with twelve more if I spent more time with that book. And besides, it would give me a chance to spend more time with my parents, as I knew them then.

When I wrote A Grave Misunderstanding, I wanted to make sure I included as many archetypical mystery characters as possible, and one in particular, Smithers the Butler, is the one I would choose to visit me. First, he’s a very sensible and logical fellow, just the kind of friend you’d want to help you with a mystery plot. And second, and perhaps most important, he’s a simdroid—an android that closely resembles a famous person—and bears a striking resemblance to late actor Peter O’Toole, but with the voice of Richard Burton. Odd, yes, but just the sort of character you’d expect in a murder mystery set in the last half of the current century. And just the sort of book you’d expect from the author of The Leadership Secrets of Squirrels, a nonfiction book I wrote from the perspective of a squirrel, Simon Silverback, which I hope explains my twitter handle.

A GRAVE MISUNDERSTANDING (AMAZON US) 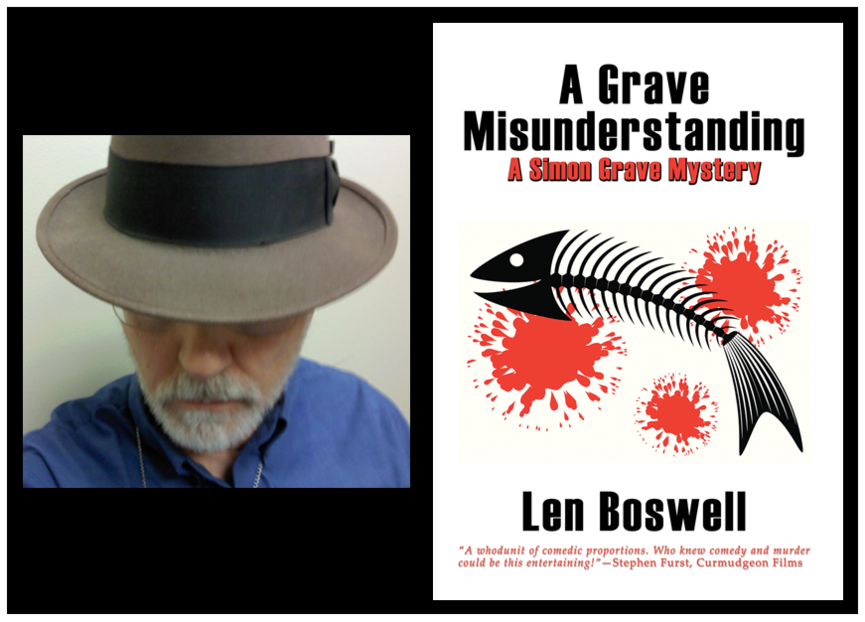