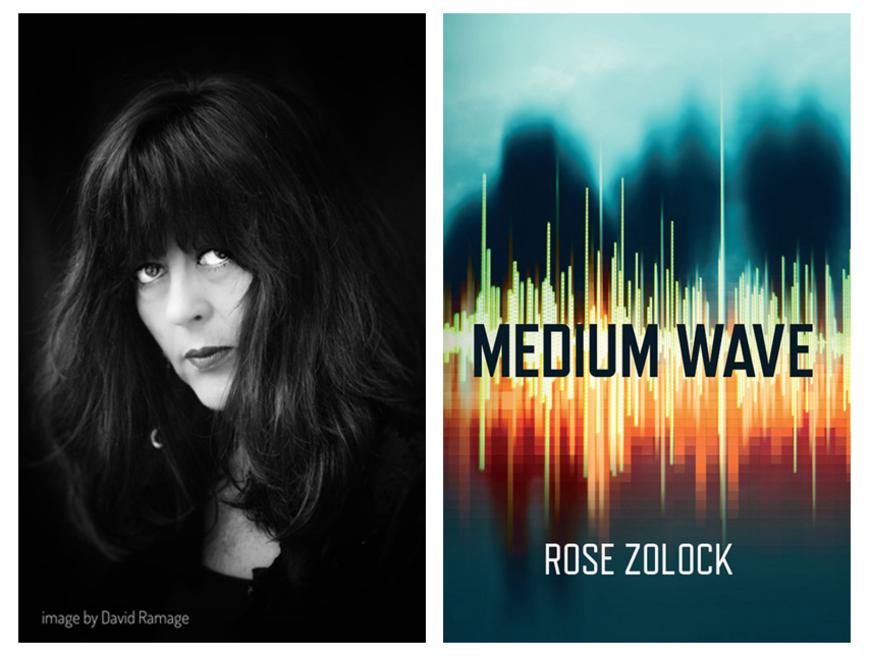 Tracking down Rose Zolock after her escape:

The Writers' Wing would like to welcome its next inmate, author and explorer of the strange and the unknown​, Rose Zolock. Medium Wave is published by Caffeine Nights, available in book, eBook and Audio Book from the 6th April 2018.

Welcome to the world of Rose Zolock.

A world where the supernatural may be just a step away  Behind a door, beyond a curtain, waiting. A slight movement, shimmering, indistinct, glimpsed out of the corner of your eye. But when you turn to look... it's gone.  That change in the air: unexpected. A suggestion of a creeping chill or a hint of musty smell: inexplicable. The ghost stories, the flickering candlelight, the ancient relic which lies in a dusty cabinet, all may reveal a history of the unspeakable.

Come and meet Rose Zolock, writer and explorer of the strange and the unknown.

Her Irish grandmother first told Rose about the Banshee when she was just a small child. How the wailing sound of the spirit of the dead and dying could be heard when someone was about to pass. It was family folklore that the women in the family had ‘the touch’, the ability to see spirits and other dimensions. Rose listened and grew up fascinated by those who claimed to have supernatural or psychic abilities.

Rose does not claim to have those powers. Take her to Venice in February when the mist swirls over the canals, walk by her side along the darkened streets of Greenwich Village in New York City in high summer, listening to a ghost walk tour guide tell the stories of death, murder and the unexplained – Rose would say those stories and our belief in them gives her a power to see into the shadows within our imagination.

As a journalist, Rose takes every opportunity to explore and investigate strange stories, myth and folklore. Living in rural Yorkshire, with a rich library of ghost stories and literary tradition, Rose also has a sceptical and forensic insight into those who peddle the stories which feed our imagination but of which  we have yet found no proof. She has listened to the debunkers who argue against those believers who are convinced that sand the dark side exist. Rose’s mind is open. Is yours?

When the heavy, iron reinforced cell door bangs behind me – I imagine this is what Bedlam sounds like, as I hear the demented cries of the insane all around me  – I find myself in a dark chamber, stone walls surround me and thick metal bars obscure the one small window high above me. The smell is damp, rank filled with the stink of those incarcerated before me. I look towards the narrow cot. I see a man, head bent, dressed in the clothes of a Cambridge University don. I sit down beside M.R. James, one of the most prolific and influential writers of ghost stories in the Victorian and Edwardian era. I want to ask him how he created a new form of supernatural storytelling – he threw out the gothic and wrote stories in a more modern style which even to this day make your ask yourself  could that happen to me? I would inquire as to where his inspiration came from and how he developed the unique ability to create horror amidst the most ordinary of settings. His ghosts were always malevolent, the setting English, the academic undercurrent challenging the rational. M.R. James could create an atmosphere of terror in less than a paragraph. He was once asked if he believed in ghosts. Like the true Medieval scholar he was, he answered he would consider any evidence and accept it if it satisfies me. He showed me evidence in his stories. I hope we can be locked up together for a long time.

1. Salem’s Lot by Stephen King. This was a tough choice as I have enjoyed many of his works. With a nod to Bram Stoker, this one combines vampires, a creepy house, shocking loss and survival. In all his prolific works, King evokes America in the 20th and 21st Centuries. He maps small town America with its fears and banality and picks out characters instantly. He is among the best of story tellers. The horror he creates is visceral but do not mistake him as a peddler of gore. Salem’s Lot is a modern version of the classic blood sucker; a diseased European praying on the inhabitants of the New World.

2. The End Of The Affair by Graham Greene. This is a mawkish love story, set in post war London, a landscape devastated, society fractured, social mores guiding behaviour. However, it is Green’s battle with God which is compelling. He uses his characters to explore faith, miracles and Catholicism. I always feel this dichotomy with my own sense of belief and I can understand how his constant exploration of it must have been exhausting. This book reminds me of blind faith, bartering with God, exploring why some believe in a higher power and yet live the often miserable existence of the faithful.

3. Rosemary’s Baby by Ira Levin. Cue the Devil. I read this on a long haul flight to New York. It made seeing the Dakota Building – the setting for the film with Mia Farrow and of course, much later, the real life location where John Lennon was shot – an even more fascinating attraction. A novel of the late 60’s, it takes the gothic bang up to date. Venality, lust for darkness and gain, the manipulation of Rosemary and of course the horror of the Devil being summoned to impregnate the innocent woman with her Vidal Sassoon haircut. A woman who trusted everyone yet was betrayed by all but one. The themes are ageless, the time capsule of the story poignant but her acceptance of the devil child was the most shocking. Atmospheric, universal themes made me think long and hard about the human desire to meddle and delve into the satanic.

4. Writing Home by Alan Bennett. The voice of Alan Bennet is funny, sharply observed and comforting to me. I will need some humour locked in this cell. I cannot help but hear his voice, unique with that flat, Leeds drawl, when I read his work. I recognise the people he writes of, his relationship with his mother, the absurdity of life and his almost laconic acceptance of seeing his life pass him by. One of the least pretentious comic writers, his pathos and self-deprecating narrative makes me feel affection for him whilst, at the same time, being in awe of what he can create with the English language. For me, he writes of home. His is a voice I admire the most. If I could take you on a bus ride around Yorkshire, you would hear Bennett-esq conversations all the time.

In my horror novel, Medium Wave, I explore the world of the paranormal. Set against a satire of the media industry in all its self- serving glory, we explore what happens to Becky Moran, a woman who has built a career as a fraudulent medium. She was lying. Lying, until something breaks through during her live radio show and she finds she is not lying anymore.

I would allow a visitor’s pass to my anti-hero, Bert Brookings.

This is a pugnacious Welshman who believes he has the power to heal. His character is based on a great deal of research into the industry of those who peddle mystical healing and claim to offer alternative cures for terrible diseases and who often encourage rejecting conventional therapy. Unregulated, Brookings targets the vulnerable and he is convinced his powers make him superhuman and capable of riding the galaxy. Hard currency and the internet have created his following, particularly lucrative in America. He loathes Becky Moran and envies her close knit team who perpetuate her myth of mediumship. He is jealous, knows it a sham and he is quite insane.  I would ask him – as he flexed his muscular back, the skin tattooed with a unicorn - if he were at all aware of a terrifying entity attached to him which Becky Moran saw when he came into her radio show, Medium Wave. I want to know how he rationalises encouraging the seriously ill to place their faith in him. But I would not allow him to lay those large, heavy hands anywhere near me.

As he declines into madness, I would ask if he truly believed he had any supernatural power and what force leads him to St George’s Church in Bloomsbury – known in the London as having the most peculiar spire in the capital. I would look into those blue eyes – enhanced by coloured contact lenses glinting in the shaft of light that came through the barred cell window – and ask him if he has any semblance of reality left at all. I suspect being in this cell with Bert Brookings may not be a good idea. Probably safer to leave him in the pages of Medium Wave…