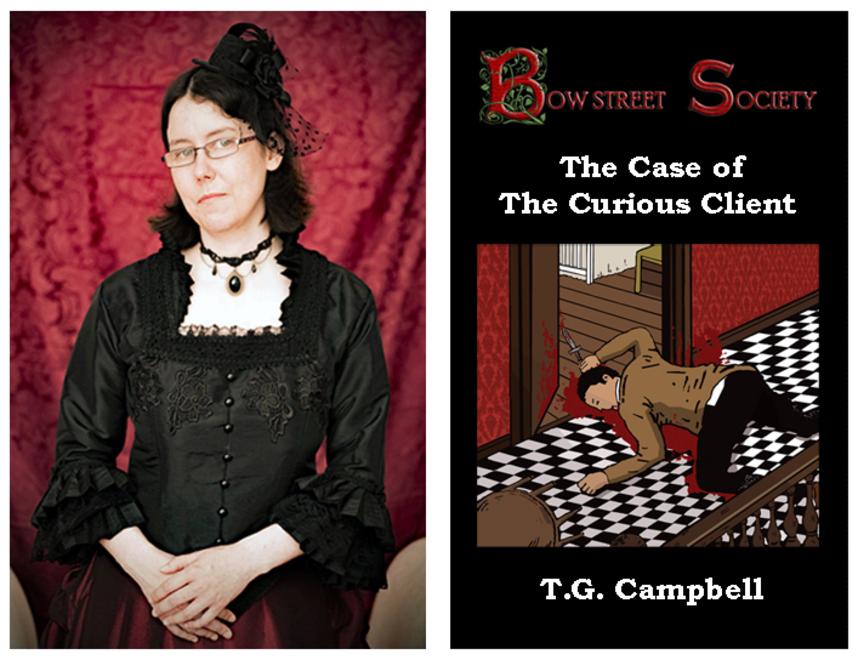 Tracking down T.G. Campbell after her escape:

The Writers' Wing would like to welcome its next inmate, and creator, mystery author T.G. Campbell.

In addition to her Bow Street Society works and The Writers’ Wing, T.G. Campbell also writes a monthly feature for Fresh Lifestyle Magazine. She’s also made contributions to The Writers’ Lounge blog, and is in the process of creating an original trailer for The Case of The Curious Client.

Agatha Christie is my literary idol and the person I most aspire to be like in my writing. In spite of this, though, I would choose Sir Arthur Conan Doyle to be my cellmate in The Writers’ Wing. Aside from the fact he’s the creator of, arguably, the world’s greatest detective, Sherlock Holmes, he was also friends with Houdini and Oscar Wilde, among others. He was also a spiritualist and campaigner for those he believed were victims of miscarriages of justice. I therefore think he’d have some fascinating stories to tell and, of course, could give his opinion of my own writing.

1. The Complete Stories of Sherlock Holmes by Sir Arthur Conan Doyle  I would choose this for the plain and simple reason that, if I’m sharing a cell with Sir Arthur Conan Doyle, I can discuss the stories with my cellmate. I could ask Conan Doyle about the inspiration behind Holmes—Ian Bell—and his reasons behind creating the cases he wrote about.

2. The Diary of a Murder by Lee Jackson This has been on my ‘to-read’ list for a long time but, for a multitude of reasons, I’ve not yet started it. Lee Jackson is widely considered to be an expert on Victorian London. This is in addition to being the curator of the most comprehensive resource of contemporary Victorian London sources on the internet: The Victorian Dictionary. It’s a website I go back to again and again for my research, and I’m certain his book would be an amazing read.

4. The Haunted Hotel: A Mystery of Modern Venice by Wilkie Collins Having read The Moonstone while at university; I would like to read Wilkie’s other works. Namely, The Woman in White and this book. The Haunted Hotel intrigues me more as it has mystery, a potential haunting, and a potential crime. I’ve always been fascinated by hauntings, urban legends, true crime, and unsolved mysteries. I expect The Haunted Hotel will be written as elaborately as The Moonstone, though, so I’ll need to put my thinking head on to read it, no doubt!

Given how many members there are in the Bow Street Society, I have plenty to choose from! The person I’d want to visit me though would have to be Mr Percival Locke. He’s an illusionist, gentleman, and master thief. He could therefore help me to break out of The Writers’ Wing, and do so with charm, sophistication, and wit.