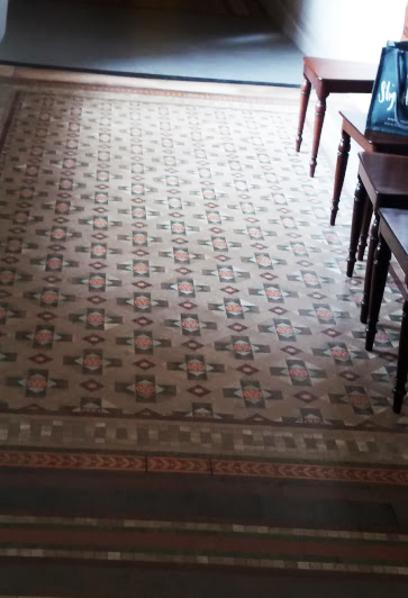 The volunteers and staff were warm, welcoming, and highly informed about the Abbey. In fact, we were offered a tour around the gardens when we first arrived but we decided to look around on our own. Upon entering the main house, we were met by a lovely lady who explained many of the original Victorian features within the hallway, including the intricate, mosaic floor (above). We were then escorted into the first of the Abbey’s storytelling zones. Depicting the Abbey’s origins as a nunnery, it included some of the wall’s original tiling, a “medieval streetlamp” in the form of an alcove carved into the corner of the wall with three, lit candles inside. Our guide explained its original purpose as marking the “turning point” when that part of the Abbey had been a cloister. Throughout the Abbey, sections of the walls’ interiors were left uncovered with glass panes placed over the top. This enabled us to see how the Abbey was constructed. It was a clever touch and excellent example of the planner’s forethought prior to the start of the restoration.

One of the many highlights of our visit was the Victorian library. Our guide showed us a framed painting of the room and explained the picture was found in a shop in London. Furthermore, that the library’s restoration was based upon the painting. He also told us that all the books we saw in the library had been donated as, prior to this, there had been modern volumes which looked out of place in such a setting. In the library—and across the Abbey room’s accessible to the public—we were encouraged to read the books, pick up items, and interact with our surroundings. There were many works by Charles Dickens and William Shakespeare. A particular favourite of mine, though, was a book by Baroness Orczy, the creator of the Scarlet Pimpernel. I couldn’t tell if the book I held was one featuring the Pimpernel, though, as it was in French! 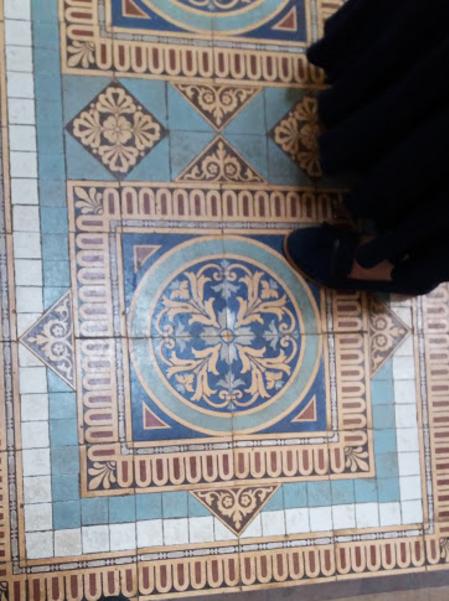 Above: two views of the Victorian floor in the hallway of Delapré Abbey ©  T.G. Campbell 2019 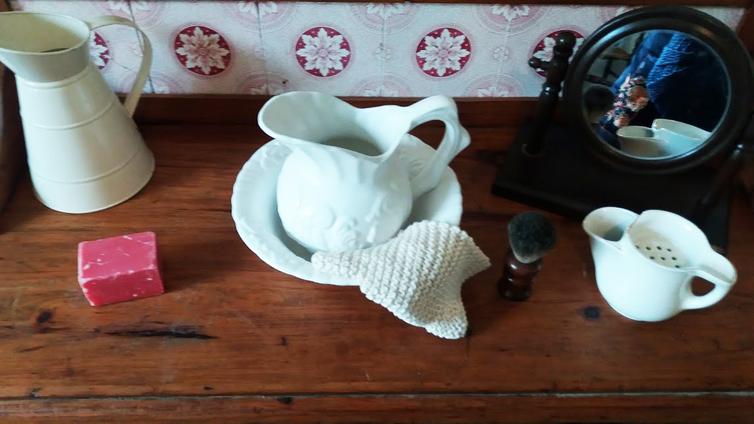 Above: : a gentleman’s washstand complete with carbolic soap, shaving brush, and water jug. My friend and I suspect the jug on the right-hand side with the holey top was used to contain shaving soap and the holes allowed the excess to be removed from the brush.  ©  T.G. Campbell 2019 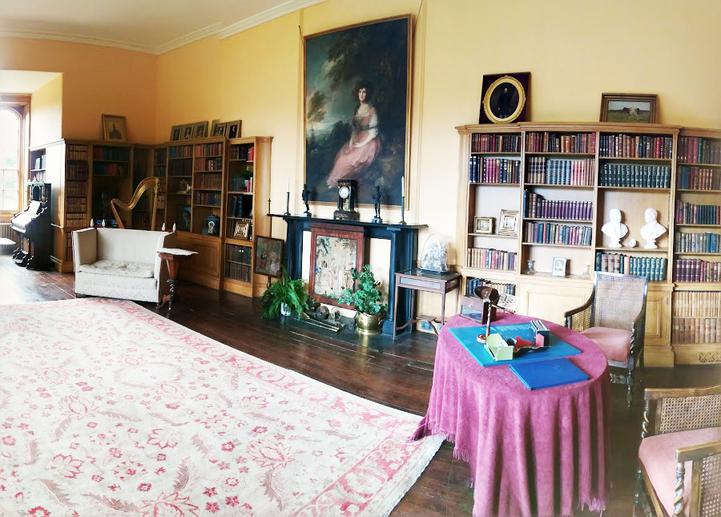 During their investigation, the Most Haunted crew had access to the basements and attics of the main house. Unfortunately, my friend and I weren’t permitted to enter these areas. Instead, we visited the Abbey’s kitchen where its original 17th century fireplace was. A fire was lit within it and we were given the opportunity to examine the various gingerbread moulds and other kitchen implements dotted around the room.

Also unlike the Most Haunted team, I and my friend didn’t experience stones being thrown at us. Nor did we hear any disembodied voices, ghostly footsteps, or knocking. If there’s ever a night time opening of the Abbey, I would be tempted to go just to see if anything were to happen. Yet, despite not having any paranormal experiences, our visit to the Abbey was a thoroughly enjoyable and memorable one. If you’re ever in Northamptonshire, I’d certainly recommend it!

Above: the restored Victorian library at Delapré Abbey ©  T.G. Campbell 2019

In the Northampton countryside is a hidden gem dating back 900 years to a time when nuns following the Cluniac order formed a nunnery dedicated to St. Mary de la Pré. Delapré Abbey, as it’s known today, has been partially restored to its former glory. It’s a location I’ve wanted to visit ever since I saw it featured on an episode of Most Haunted. Quite derelict back then, it’s amazing to see how far the Abbey has come. This is, of course, down to the hard work of a legion of volunteers and the Delapré Abbey Preservation Trust.

Located within the 500 acre landscape of Delapré Park, in the county of Northamptonshire in the East Midlands, the entrance to Delapré Abbey is through a set of gates on the London Road (A508). The driveway is framed by vast, lush green parkland and leads to the first of two carparks. Parking and access to the park and Orangery coffee room are free. Tickets into the house may be purchased in the Visitor Welcome centre housed within the Stable Block. Due to my visit being on a Friday during term time, the Abbey and park were relatively quiet. I and my friend were therefore able to wander around the place at a leisurely pace.