Traitors’ Gate is where “State prisoners” entered the Tower of London after being transported there by boat. By comparing the Queen’s London photograph to my own I think the photographers of the Bow Street Society’s era captured their image from the gate’s exterior. Mine, on the other hand, was taken from a cobbled walkway on the gate’s interior. Apparently the gate could be seen by boats on the River Thames in 1896. I don’t know if this is still the case today, though. It’s impossible to imagine how prisoners must’ve felt as their boat neared the gate and they were taken into the Tower of London.

As one walks around the Tower of London today one may see sculptures of a polar bear, primates, and even an elephant. Created by an artist at the commission of the Tower of London the sculptures represent the little known period during which the Tower housed a menagerie. Originally born from a trend amongst medieval kings to gift wild and exotic animals to one another the menagerie was a popular visitor attraction until the early nineteenth century. Visitors would cross a bridge to the “Lion Tower” where they could view actual lions. The ruins of this tower are still visible today. Due to concerns over animal welfare over one hundred animals were moved to the zoo at Regent’s Park in 1826 and the menagerie itself was closed in 1835. The “Lion Tower” was demolished in 1852.

I hope you’ve enjoyed this virtual walk around the Tower of London—in 1896 and 2019—with me. Remember, at the beginning I mentioned I like to use real-life locations in my Bow Street Society books. The question is: which part of the Tower of London will appear in the next mystery?

THE QUEEN'S LONDON: A pictorial and descriptive record of the streets, buildings, parks and scenery of the great metropolis in the fifty-ninth year of the reign of Her Majesty Queen Victoria, published by Cassell & Company, Ltd in 1896. This reference source is from Lee Jackson’s Victorian Dictionary: http://www.victorianlondon.org/index-2012.htm

The Tower of London attracts millions of tourists every year and it’s been on my “bucket list” of places to visit for a long time. In March I was finally able to tick it off. The photograph above is of the famous White Tower that stands within the complex of buildings which comprise the Tower of London. If you’ve read my Bow Street Society books you’ll know I’ve included many real-life places. Whenever I use one of these places I like to base my description upon two sources: my own visit to the location (if it still exists) and a fantastic collection of photographs from 1896 called THE QUEEN'S LONDON: A pictorial and descriptive record of the streets, buildings, parks and scenery of the great metropolis in the fifty-ninth year of the reign of Her Majesty Queen Victoria and published by Cassell & Company, Ltd. This month’s blog is therefore a celebration of this tradition by comparing the Tower of London as it was in 1896 (when the Bow Street Society would’ve operated) and today (2019).

The Tower of London

A glimpse into the real-life world of London in 1896. 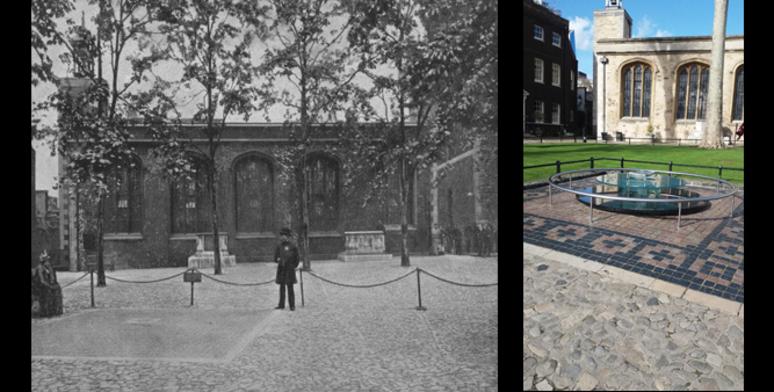 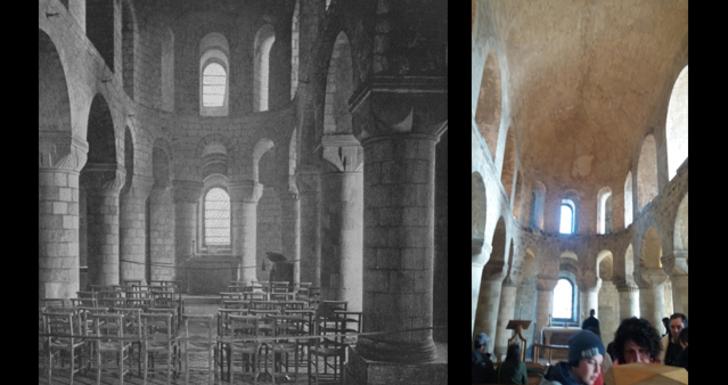 The two above images depict the spot where the scaffold previously stood. The one on the left is from Queen’s London whilst the one on the right is my own photograph of the spot today. Beneath the glass, and protected by the metal barrier, is a memorial to those who died there. The Queen’s London describes the spot as thus:

“In the centre of the Green, which is well planted with trees, is a small, square place, marked off and railed in by the express command of Queen Victoria. The flat stone shows the site of the block on which six persons were beheaded in the years 1536 to 1601 -  Henry VIII's Queens, Anne Boleyn and Katherine. Howard, the Countess of Salisbury, Lady Jane Grey, the Viscountess Rochfort, sister-in-law of Anne Bolevn and arraigned with Katherine Howard, and Robert Devereux, Earl of Essex. All these were buried in St. Peter's Chapel, with many others who were executed in public on Tower Hill. Of the little cemetery adjoining, Macaulay wrote that there was no sadder spot on earth.” 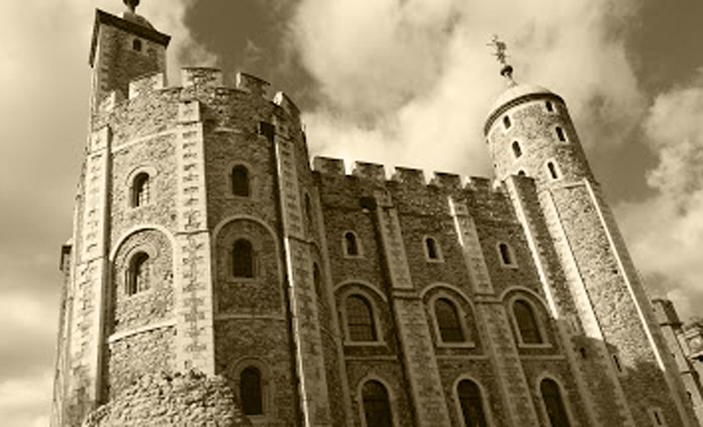 According to the authors of Queen’s London the White Tower was built in 1078 by William the Conqueror. Housed within the Tower is St. John’s Chapel that was described in 1896 as “a singularly interesting specimen of Norman architecture - the best preserved, indeed, in all England.” The photographers of the Bow Street Society’s era had the luxury of an empty space to work with. As you can see from my attempt on the right the Chapel was filled with tourists. Nevertheless, it’s clear to see how little the Chapel has changed in 123 years. I’ve visited many churches, chapels, and cathedrals on my travels and they are usually ornate and highly decorative. Yet I was struck by how bare St. John’s Chapel was when I visited. Though the pillars have some ornateness in their masonry the stone itself is rough while the ceiling is devoid of the intricate carvings of other Holy buildings. I think there’s something fundamentality functional about the Chapel. In my opinion it’s not there to impress or awe inspire but to serve a practical purpose. Its bareness is a representation of its honesty as a place of worship or, in other words, one isn’t expected to worship the room but to the higher being beyond its windows.