The Writers' Wing would like to welcome its next inmate, thriller writer Avanti Centrae.

Avanti Centrae is the author of the international award-winning VanOps thriller series. The Lost Power took home a genre grand prize ribbon at the Chanticleer International Book Awards (CIBA), and an Honorable Mention at the recent Hollywood Book Festival. Her work has been compared to that of James Rollins, Steve Berry, Dan Brown, and Clive Cussler. She resides in Northern California with her family and German Shepherds.

Brrr, it's cold in this prison! My literary cell mate is Dan Brown, unfairly serving a life sentence. Although he's a little thin from prison fare, he's been spinning yarns for hours to help me forget how cold and damp it is in here! Many readers comment that The Lost Power reminds them of The Da Vinci Code, and I've been enjoying his thoughts on the comparison. It's been fun to talk shop. I've already learned a few things about his writing process and hope he'll tell me more about Robert Langdon's next adventure.

If you’d give me some light in this cell, I’d like to reread Carlos Ruiz Zafon’s four book suspense series The Cemetery of Forgotten Books. I just completed the last thriller of the series, The Labyrinth of the Spirits, only to discover I missed the third one, The Prisoner of Heaven. Not only would I like to fill in the blanks, but I’d like to study the brilliant way he intertwined the plots and characters from each book. The final volume pulled all the threads together into an impressive, colorful weave that will haunt my dreams for years to come. The man is truly a master storyteller. I aspire to someday evoke atmosphere like he does.

Maddy Marshall, app designer and aikido black belt, is an intelligent and independent woman thrust into a dangerous world where her non-violent martial arts skills aren't enough to save herself or her country. To survive a series of arcane tribulations, she must look deep into the past, and her green eyes become dark with anger when the lives of those she loves are on the line. Tall, dark-haired Will Argones, Maddy's twin brother, is a skeptic who has made his living as a successful test engineer. Always on the lookout for danger, he can't keep his hands still - his fingers drum on his long legs or twirl his ever-ready-for-trouble flashlight. He's also forced out of his comfort zone and into a deadly, international game of cat and mouse. Broad-shouldered Theodore Thorenson, a bristly-haired marine, has always wanted to carry the world's troubles on his back by being a covert operative. He jumps at the chance to join VanOps, an ultra-black organization with the duty to stop extreme threats.

There’s also an intriguing cast of villains, including Ivan Klimov, one of Russia’s most accurate snipers. Graced and cursed with congenital analgesia, he’s insensitive to pain. As a blood ritual, he marks his kills on his arms and legs to remind himself to be cautious. His patience makes him extremely dangerous.

One of my reader’s favorite characters is AJ, a freckle-faced foster boy at Maddy's dojo‎ with satellite dishes for ears. He’s kidnapped by Ivan, the sniper, and another villain. Feigning sleep, AJ overhears a plot to destroy America's early warning defense system.

It's tempting to have AJ visit to play with me, or Ivan, to teach me more about life in Russia. But I’m going to choose Maddy, as she’ll use her dangerous combination of intelligence and martial arts skills to break me out so that I can continue to tell her story. And eat real food again. The journey to the cell was fun, but bread and water doesn’t fuel my creative fire!

VanOps: The Lost Power will be published November 9th by Black Opal Books. Interested readers may download the first six chapters for free on her website.

Tracking down Avanti Centrae after her escape: 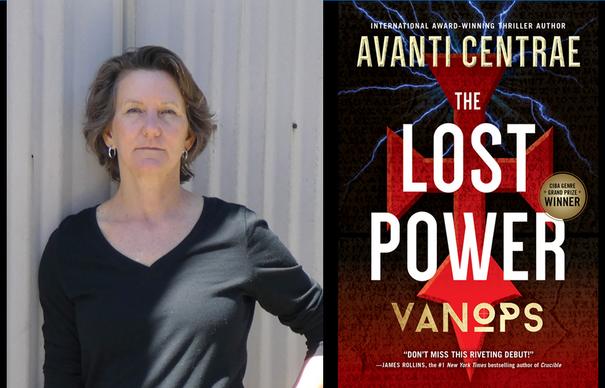