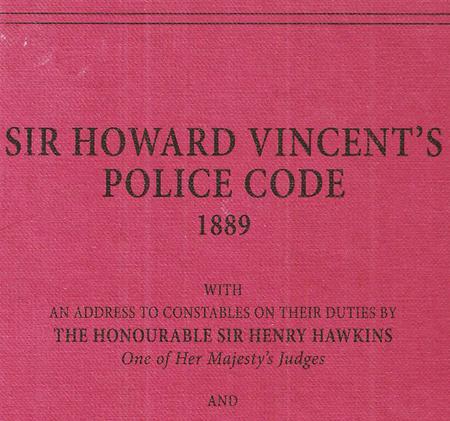 If you’ve been following this blog for a while, you’ll know I wanted to be a police officer when I was younger but couldn’t for health reasons. In spite of this, I’m still fascinated by the culture and psyche of policing. I believe it’s an undervalued job that requires a certain type of individual. Furthermore, that one can’t fully appreciate what it means to be a police officer unless one has done the job. It may be an element of yearning for forbidden fruit, but I doubt I’ll ever stop wondering about the hidden world behind the police station’s doors.

Now, when I apply the same questions to policing in the late nineteenth century, I’m desperate to build a time machine in order to witness it for myself. Wider social issues aside, it’s the everyday that interests me. What was it like to live and work as a policeman in 1896? From everything I’ve read, seen, and heard, one thing seems clear to me: there is little distinction between the point where the job ends and the individual begins.

With this in mind, and to elaborate further on the themes explored in the 5th Bow Street Society Mystery, The Case of The Maxwell Murder, I’ve chosen five quotes from Sir Howard Vincent’s Police Code (originally published in 1889) which stood out to me when I first read them. This was the sixth edition of the code issued to Metropolitan police officers. According to Deputy Assistant Commissioner Neil Basu in his foreword of the modern reprint of the code, Sir Howard Vincent was “a man of fair ranging talents, and a qualified Barrister … who originally penned the book, re-published here, which for the first time brought criminal law and procedure within the easy understanding and grip of the ordinary Police Officer.”

5. Discipline
“1. Discipline is the obedience and respect to lawful authority which distinguishes an organised body from a rabble. 2. While the public interest demands that discipline shall be rigidly maintained, and neither disrespect nor disobedience tolerated, it should not be enforced by an habitually harsh and dictatory manner.” p.65

4. Conditions of Police Service
“2. Every police officer must give his whole time to the service … for the service demands the whole available energies of every individual.” p.48

3. Disobedience of Orders
“No disobedience of an order can be allowed in any form, and every officer must recollect that it is his duty first to obey, and then, if necessary, to complain.” p.66

2. Detectives
“7. Detectives must necessarily have informants, and be obliged to meet them when and where they can. But it is very desirable that the public-house should be avoided as much as possible. Tap-room information is rarely worth much. Occasionally, perhaps, refreshment must be given to an informant, but when possible it is best to give money.” p.64

The following are some of the “faults” which young constables could incur during their first few years of service. These are listed amongst others on the Misconduct of Police section on pp.115-116. The italics are my own thoughts on each:

* Talking and gossiping on duty(silence is golden)

* Unpunctuality for parade (I hate waiting for late-comers, too)


1.Orange Peel.
“1. The police should remove pieces of orange peel when seen on the pavement, frequent accidents occurring by passengers slipping thereon. 2. If orange peel is wilfully and continually thrown on a pavement, with the evident design of causing annoyance and exposing the public to danger, the delinquent may be apprehended and charged with throwing rubbish on a thoroughfare.” p.124


I hope you enjoyed this handful of quotes I picked out. If you’d like to read the rest of the code, this reprinted edition is available to buy from Mango Books here: https://mangobooks.co.uk/products/sir-howard-vincents-police-code-1889

COPPERING BY THE CODE: