Above: ​Advertisement in The Globe from Friday, June 18th 1897

The June 2022 marks the 70th year of the reign of Her Majesty the Queen Elizabeth II, officially making her the longest reigning British monarch in history. Prior to this, the accolade belonged to Her Majesty’s great-great-grandmother, Queen Victoria who reigned for almost 64 years from 1837 – 1901. Therefore, the members of the Bow Street Society would’ve had the pleasure of celebrating Queen Victoria’s Diamond Jubilee in June 22nd 1897. What was it like, though?

Commercialising the Jubilee
It sometimes feels like every occasion is now an excuse for businesses to make money, even those which seemingly don’t lend themselves to commercialisation, such as a royal jubilee. Yet, even in 1897, publications like The Globe carried advertisements for various jubilee-based products. Such as “Jubilee Medals for Children” by Piccadilly-based Spink & Son Medallists, “Queen’s Jubilee Brand Meat Lozenges,” and “Schweppe’s Soda, Seltzer, and Potash Wafers &c.” by “royal warrant of appointment to ‘The Queen’ and H.R.H. The Prince of Wales.”

Businesses also took advantage of the limited space along the planned route of the royal procession by erecting temporary wooden stands for paying spectators on the fronts and rooftops of their premises.  In her book A Looker-On in London published in 1899, Mary H. Krout states that by “the first of June, London was transformed; Westminster Abbey, and the House of Parliament were about the only landmarks remaining; even churches were concealed behind the wooden galleries that had been erected across their front windows and entrances.” The heightened demand for workmen capable of constructing these stands inevitably led to the businesses paying higher fees for their labour. According to Mary H. Krout, businesses initially charged “ten and twenty guineas … for very moderate accommodations, with an extra sum for luncheon - which was usually provided.”

By the 18th June, though, The Globe carried an advertisement for “Jubilee Seats at Strictly Moderate Prices.” The seats were priced at “one guinea upwards” but “present prices cannot be guaranteed.”

A Looker-On in London, published in 1899, Mary H. Krout from Lee Jackson’s Dictionary of Victorian London

According to the article in The Westminster Gazette:

Upon arriving at St. Paul’s Cathedral, Queen Victoria remained in her carriage as the service of Thanksgiving was conducted. The unusual decision to hold the service outside is said to be due to Queen Victoria’s arthritis preventing her from climbing the steps. The temporary stands erected on the rooftops of the buildings overlooking the cathedral were filled with spectators. As were the surrounding pavements. In fact, it’s said to have been so crowded, some members of the choir were obliged to stand upon the pedestals either side of the cathedral’s entrance. This is even before one takes into consideration the hundreds of soldiers, representatives from the British Empire, etc, which made up the six-mile-long procession.

A spectacle to behold
On June 22nd 1897, Queen Victoria left Buckingham Palace at a quarter-past-eleven in the morning to the boom of a cannon fired in Hyde Park.[1] Still mourning the loss of her beloved Albert, she wore black as she rode in an open carriage beneath a white parasol. According to an article in The Westminster Gazette on June 10th 1897 titled “Metropolitan Police. Diamond Jubilee of Her Majesty the Queen,” the “line of route of royal procession” was as follows: 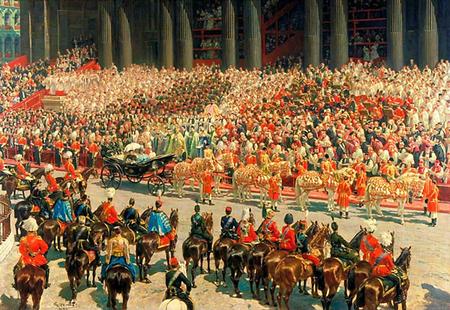 Surprisingly good weather
Anyone who has lived in Britain will tell you that June rarely guarantees good weather. Yet, Queen Victoria’s Diamond Jubilee celebrations in 1897 were enjoyed under a cloudless sky for the most part. Unfortunately, as is often the case, the glorious sunshine was short-lived. In the days which followed, violent thunderstorms inflicted their wrath upon London.

Wait a minute, the Bow Street Society books aren’t set in 1897…
At the point of writing, all Bow Street Society books and short stories are set in 1896. As time moves forward with each new book, though, who’s to say that the Society won’t be enjoying Queen Victoria’s Diamond Jubilee in the near future? Perhaps, some officers of the Metropolitan Police will join them.

the route was splendidly decorated with flowers, garlands of bay, arches and Venetian masts from which fluttered countless blue and scarlet pennants; and adjacent balconies were draped with scarlet cloth fringed with gold, and were crowded with blossoming plants. At one place there were portraits of the Queen and the Prince of Wales showing in fine relief against a solid background of white carnations; the office of one of the newspapers displayed loyal mottoes in costly mauve orchids; whole buildings were hung with festoons of sweet-smelling bay; the Junior Army and Navy stores were almost hidden with thick ropes of evergreens; the Colonial offices were also a mass of greenery and vivid color, while one building was covered with parterres of cornflowers, vivid red geraniums and white alyssum; even Downing street relaxed its severity and contributed flags and coats of arms to the universal adorning; the royal standard, only, floated from the spire of the Parliament building.

A DIAMOND JUBILEE FOR THE BOW STREET SOCIETY 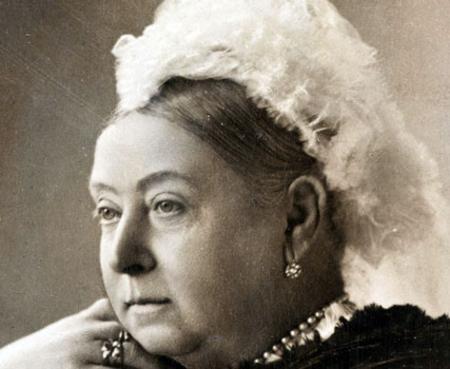