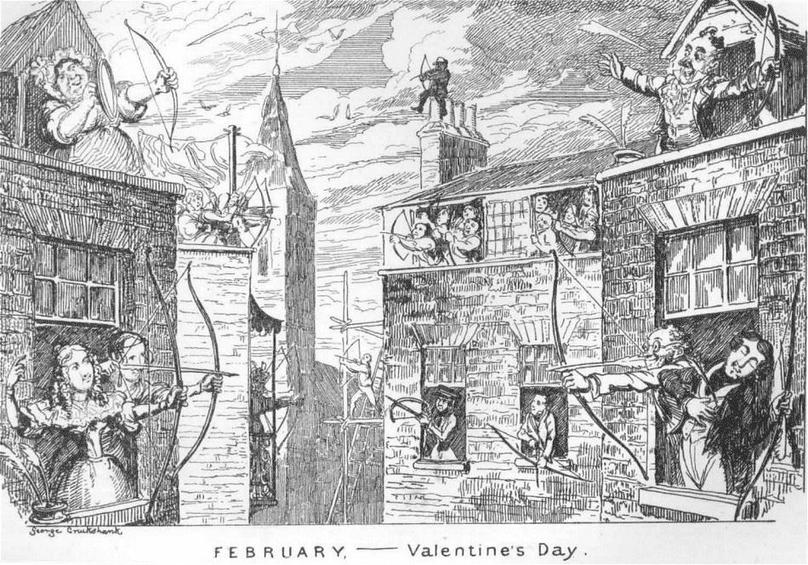 Valentine’s Day as we know it today is considered by some as a modern phenomenon. Proclamations of love in various forms are as old as the human race itself. Yet, we often cite Valentine’s Day as being a holiday created by the greeting card manufacturers to make money. In truth, Valentine greetings were, according to History.com, popular “as far back as the Middle Ages, though written Valentine’s didn’t begin to appear until after 1400.” The same article then goes on to state:

“The oldest known valentine still in existence today was a poem written in 1415 by Charles, Duke of Orleans, to his wife while he was imprisoned in the Tower of London following his capture at the Battle of Agincourt. (The greeting is now part of the manuscript collection of the British Library in London, England.)”

It wasn’t until the 1840s that American Esther A. Howland began to sell mass-produced Valentine cards made from pieces of lace, pictures, and ribbon, a.k.a. “scrap”. In Great Britain though letters remained the favourite means of declaring one’s affection until 1900 when “ready-made cards” and “cheaper postage rates” made it easier for people to “express their emotions in a time when direct expression of one’s feelings was discouraged.”

“…frequently fraught with disappointment. A girl expects many valentines and few arrive, or none come at all. Worse still, what do come are sent by the wrong people. Valentine's day thus becomes a sore trial of temper to many girls. When the longed-for billet does appear, and the doves of Venus have fluttered in at the postman's knock, they not unseldom bear with them a twig of wormwood instead of a spray of myrtle. The vision of bliss evoked by the Valentine rapidly turns into a wintry dissolving view…Every now and then a trial for breach of promise discloses these love passages of a blighted existence to the wondering gaze of the social philosophers, and then they recognize for how much misery good Bishop Valentine has to answer.”

Provided one is inclined toward the idealised vision of romance portrayed in books and on stage at the time, of course. For some, the mere volume of letters sent through the post in the name of Saint Valentine and his day was a point of contention. According to one letter sent to The Times newspaper on the 15th February 1873:

"As usual, also, on this Saint's day, [the postman] has not delivered my copy of The Times which, sent from Printing-house-square itself, arrives by the first post on all other days in the year with delightful regularity. Now, what is breakfast without one's newspaper…I ask the Postmaster-General, on grounds of justice and of mercy, whether daily newspapers should be delayed in the post for the sake of this stupendous annual folly - these maudlin, impertinent love-letters, which might be kept back for a week, or, still better, pitched in the Thames by cartloads without hurt to anybody?"

Fortunately, most of us today aren’t at risk of not receiving our morning newspaper due to the masses of love letters, cards, and gifts sent through the mail. A good thing, too, for even the gigantic River Thames could not contain the millions of parcels ordered from internet retailers every day.

The following sources are courtesy of Lee Jackson’s Dictionary of Victorian London http://www.victorianlondon.org/index-2012.htm

The Queen (a magazine), 1882
http://www.victorianlondon.org/entertainment/valentines.htm

Letter to The Times, 15 February, 1873
http://www.victorianlondon.org/entertainment/valentines.htm

BE MY VICTORIAN VALENTINE?

A glimpse into the nineteenth century's "day of love"