Tracking down Howard Levine after his escape:

You may close this browser to leave this site. 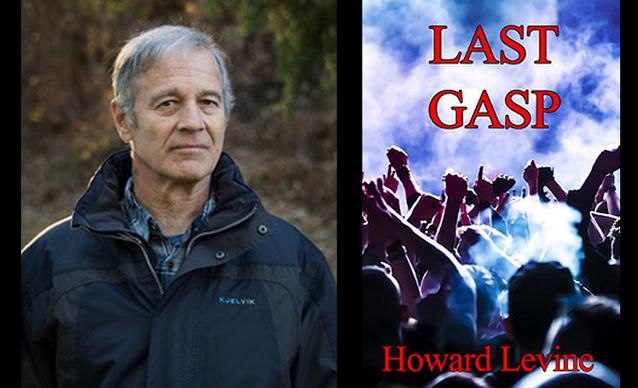 The Writers' Wing would like to welcome its next inmate, thriller writer Howard Levine.

Howard’s latest book, Last Gasp, follows Frank Tedeschi. His niece is dead, one of thousands of victims of a terrorist attack, which has been laid at the feet of “Islamic radicals” by a right-wing US government. Frank—based on a chance encounter—is one of the very few people who question the government’s explanation. He’s a Vietnam veteran who wants nothing more than to live without further controversy or conflict. Can he and his grieving brother Rob, a detective with the NYPD, obtain the necessary evidence to uncover the truth in the face of scorn and incredulity? Can they overcome their long-term estrangement to work together, given that they are putting their lives in danger? Described as “a highly original and skilled blend of literary depth and compelling suspense” by Carol Goodman, Hammett Award winning author of The Lake of Dead Languages and The Other Mother, Howard Levine’s Last Gasp promises to be a thrilling page-turner readers will find hard to put down.

Who is your cellmate, and why?
Wanda Sykes, the comedienne, is my cellmate, assuming that my jailers wouldn’t mind that my cellmate is a female.  She’d make an ideal cellmate because she almost always can make me laugh, which I would need desperately if stuck in a prison.  Also, she’s very irreverent, and the same can be said about my novel Last Gasp—at least where religion and politics are concerned.

Lastly, I believe she wouldn’t take any mess from anyone.  She could be my protector.

Which four books would you choose to pass the time with, and why?
The first book would be An American Marriage, by Tayari Jones.  That’s the best novel I’ve read recently, and my favorite section involved the letters sent by the unjustly jailed protagonist to his wife.  The second would be The Poisonwood Bible, by Barbara Kingsolver, which is one of my all-time favorites.  One of its themes is the fallacy of thinking that you can foist your religious beliefs on others.  Number three would be World’s End, by T. C. Boyle.  The sheer brilliance of his writing in that novel, and his total command of the language, might inspire me to have a go at writing.  At the least, that would help pass the time.  The last would be Nutshell, by Ian McEwan.  It’s a brilliantly constructed thriller and family drama, worth rereading.

Which one of your own literary creations would you choose to visit you, and why? ​
I would choose Paul Fowlkes, the iconoclastic FBI agent in Last Gasp.  He has his own irreverent sense of humor.  Also, he knows the ins and outs of the legal system—if I was in jail, it would surely (hopefully) be a mistake.  Plus, as he demonstrates in the novel, Fowlkes has a knack for providing a remedy in otherwise hopeless situations.