On Bow Street is one of London’s most famous thoroughfares — in addition to being the location of the Society’s fictional headquarters, of course. Its police station was as famous as its magistrates’ courts. The vast majority of police presence at the Bow Street station was removed in the second half of the twentieth century with the station closing completely in 1992. The Magistrates Court, whose past defendants included Oscar Wilde, Casanova, Doctor Crippen, and the Kray Twins, closed in 2006. Its cases were moved to the new City of Westminster Magistrates Court in Horseferry Road, London.

Planning permission has been granted for the old building to be turned into a hotel. Fortunately, a museum of police-related artefacts, housed in some of the building’s former cells, is due to be opened later this year. I intend to pay the museum a visit when it does and share my experience in the blog. In the meantime, though, I’m excited to bring you a very special interview with Dave Allen, a retired police officer who worked at the Bow Street Police Station throughout his career. He now runs a website dedicated to reuniting past colleagues from the station: https://bowstreetpolicestation.weebly.com/


1) Could you tell us a little about yourself?
I joined Bow Street in November 1966 as a PC and stayed at that rank all of my service. I enjoyed what I was doing and so promotion or transfer would've meant that I would have to leave the place where I enjoyed working.

I was there until 1987 when I moved to Scotland Yard to 'Method Index', identifying criminals by their methods, and now using computers to do that job. I spent 4 years there and came back to Bow Street in 1991 as a Crime Prevention Officer, giving advice to members of the community on any subject, mainly burglary, shoplifting, credit card fraud and terrorism. I was then involved in the preparation for the closure of the station in 1992. We amalgamated with Cannon Row Police Station to become Charing Cross Division at the refurbished Charing Cross Hospital.


2) Can you describe your first day at the Bow Street Police Station?
My first day at the station, as far as I can recall, was being picked up in a car by a uniformed PC from West End Central Police Station which was the Divisional station, and taken to Bow Street where I would have been seen by the Superintendent of the station and then handed over to the Superintendent's clerk to sign all sorts of paperwork, organise a Bank account for my pay (a very new idea in 1966) and then taken to my room at McNaghten House in Judd Street in the section house, a building for single men. No work done that day.

But perhaps you wanted to know about my first day on the beat. In those days you went onto parade with the other constables and were paired up with an older officer, most of whom didn't want the restriction of having a probationer to look after or cramp their style. I can't remember my fist day out but generally the older PCs were also probationers as well (with under 2 years service) and so you went out with similar minded young men. But if you did have to go out with an older PC you would have to walk one step behind, probably not being spoken to, and followed wherever they went, whether it was in the back entrance to a restaurant for tea or the side entrance to a pub for a pint! So it was more likely that you would learn the ropes from a younger officer who had been through the same induction as you were going through, but just a few months before.


3) What is your most enduring memory of working at the Bow Street Police Station?
Probably the most enduring memory of working at Bow Street was the huge change in the area. Up until 1974 Covent Garden fruit and veg market was in full swing then, when that closed, the whole area changed into what it is today, a thriving tourist area. It changed from a throbbing area of large vehicles and traffic jams to a less busy area which later became a shopping and entertainment area with bars and restaurants.

But the camaraderie of working with many other young men, enjoying the social activities and sport. I played football for Bow Street for 20 years and loved it. Unfortunately Police Services don't support sport these days like they used to.


4) If the Bow Street Society had existed during your time at the Bow Street Police Station, how do you think the Metropolitan Police would’ve reacted to their interference in police cases?
I think that during the 1960s and ‘70s when the police could more or less do what they wanted, as there was no such thing as taped interviews etc., that they would not have been pleased with interference from the outside. In those days it was easy for police to get evidence if they believed that the suspect they had was guilty. I refer you to the Timothy Evans case at 10, Rillington Place. They believed him to be the murderer of his wife and baby despite evidence from the builders doing work in the house at the time that he couldn't have done it. They made the builders change their original statements regarding dates to fit in with their own timeline of events.

But whilst on that subject, I have recently read 2 books, the biography and autobiography of Albert Pierrepoint the official hangman, which I can recommend. In those books it is obvious that he was a true professional in the way he went about his work and the scene in the film, '10 Rillington Place' starring Richard Attenborough as Reginald Christie, of the hanging of Evans is remarkable in its accuracy and speed. It is well worth watching just for those few seconds of film. Apologies for digressing.


5) What was the reaction of you and your colleagues when the decision was made to close the station?
The reaction to the news that Bow Street Station was to close was that it was a great pity that the street where Policing started would no longer have a Police presence. The building wasn't the first Police Station in Bow Street but as it was opened in 1888 it was now no longer suitable for the new technology that was coming in everywhere. Whilst we understood the reason for the closure it was losing the name 'Bow Street' to the Metropolitan Police Service that was the most disappointing thing. And, of course, we were moving out of a smallish building into 'the biggest Police Station in Europe' namely Charing Cross Police Station, which had been the old Charing Cross Hospital. Big is not always better.

6) As a retired police officer what advice would you give to would-be crime fiction authors?
By all means give some background to the investigating officer to make him believable but please don't make him the prime suspect for a murder that he is supposed to be investigating. I can only think of one case where a policeman has committed murder, but I may be wrong.

I’d like to thank Dave Allen for taking the time to answer my questions. Also, for giving us a tremendous insight into the real working lives of both the Bow Street Police Station and its officers. If you, or anyone else you know, has a connection to the Bow Street Police Station, e.g. you or a family member worked there, feel free to contact Dave using the details on his website: https://bowstreetpolicestation.weebly.com/

INTERVIEW WITH A RETIRED 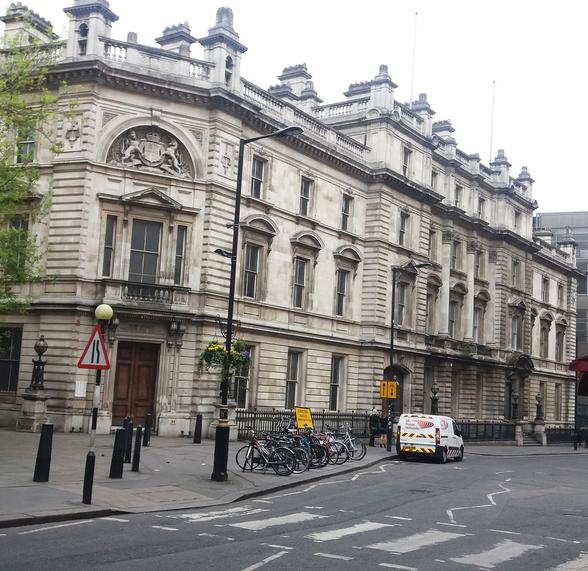