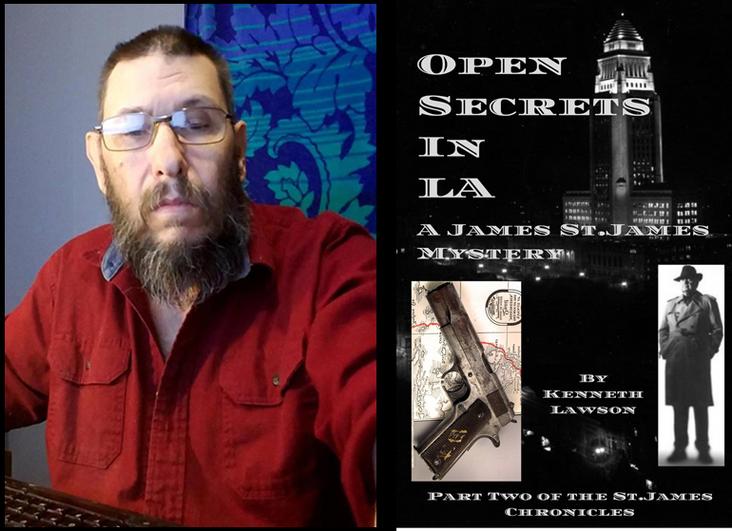 Interested in becoming an inmate on the Writer's Wing? ​​​

The Writers' Wing would like to welcome its newest inmate, Film Noir author Kenneth Lawson.

Kenneth Lawson was born in 1961, in Western NY. He started writing as a teenager. Today, he lives in Central Virginia, with his wife of 30 plus years, and the youngest of their four children. He enjoys classic movies and television, and a variety of music. When not enjoying movies. He can be found writing his eclectic mix of science fiction, mystery, and time travel. Kenneth's latest project is Open Secrets in L.A: A James St. James Mystery. ​This is the second mystery to feature Lawson's hardboiled protagonist, the first being 10 Days in L.A. ​Lawson explains "I created James St. James as an homage to a film genre I love; Film Noir. This is my attempt to honor the great writers, actors, and directors who made Film Noir what it is today and, hopefully, it's a fun story for you to read."

Who is your cellmate, and why?
I'm not sure who would wind up being my cellmate. Bogart would be top on my list, as I'm writing Film Noir right now, and he's definitely one of the top actors in the genre.
As for why we'd probably both be there; busting up some people. At least, my character, James St. James, would be, and, by extension, so would I.


Which four books would you choose to pass the time with, and why?
It would probably be stuff I've read before. "The Big Sleep" by Raymond Chandler, as Philip Marlowe, and Bogart, were the inspirations for my character, and really started my passion for film noir. Anything with Sir Arthur Conan Doyle's Sherlock Holmes, as I used to have a complete collection of his stories in one, BIG book. Finally, any book by Agatha Christie. Probably one with Hercule Poirot or Miss Marple.


Which one of your own literary creations would you choose to visit you, and why?

The obvious answer is James St. James; my film noir P.I. If he were to come to this time and place, he'd probably be horrified and amazed at what we do now.  If one could get him to talk about his time in the Marines in WWII,  we would probably be amazed and horrified at the things he had to do. It still haunts him.   He wouldn't be happy here. There's no room for his style of work anymore. He tends to break people before he asks questions.​

Tracking down ​Kenneth Lawson after his escape: