Without everyone’s expertise, professionalism, support, and determination I wouldn’t have been able to make the high quality book trailer I did. For that I’ll be eternally thankful to them and I wish them all much success in the future.

Above: Interview with Daniel Toal and Sabrina Poole ©  T.G. Campbell 2019

THE CASE OF THE CURIOUS CLIENT

BOOK TRAILER
Celebrating the 1st anniversary since its release

November 2019 marks the first anniversary of The Case of the Curious Client book trailer’s release. To celebrate, I’ve a Director’s Commentary for you to watch and enjoy, as well as give further details from behind-the-scenes.

My motivation for making a book trailer…
I wanted to make a trailer to introduce the Bow Street Society concept, books, and characters to a wider audience. Visual media is increasingly becoming the most common form of advertising. It’s accessible, easy to share with your friends on social media, and a memorable experience when done right. I therefore wanted to harness the potential reach a book trailer could have by producing something that was of a high, professional quality. I also was determined to prove a self-funded independent author could hold their own within the competitive book trailer marketplace.

The script and storyboard...
In the beginning, I explored the possibility of creating a book trailer composed entirely from voice-overs and royalty free stock film. The only period appropriate footage I could find, though, was created during the Victorian Era. I wanted to appeal to a modern audience so decided against using the silent, grainy, black-and-white street scenes from 1896 London.

The first draft of the trailer’s script featured multiple Bow Street Society members and Metropolitan Police Officers from the books on London streets at night. My aim was to visualise the final trailer without becoming bogged down by practicalities. Nevertheless, I soon realised such plans had the potential to become too expensive for my modest budget.

The second draft still had numerous characters taken from both The Case of the Curious Client and The Case of the Lonesome Lushington. The third (The Case of the Spectral Shot) and fourth (The Case of the Toxic Tonic) books were pending publication and hadn’t been written yet respectively at this point. The second draft also included scenes from the first book, such as Jack Colby being manhandled by Inspector Conway and Mr Maxwell searching a trunk. There were also brief scenes depicting the various Bow Street Society members carrying out their usual professions. For example, one such scene would see Doctor Percy Weeks dissecting a body within the authentic surroundings of the Old Operating Theatre in London. This version of the script was abandoned due to it being too long, too complicated, too impractical, and too expensive to produce, however.

Above: A Director's Commentary narrated by yours truly ©  T.G. Campbell 2019 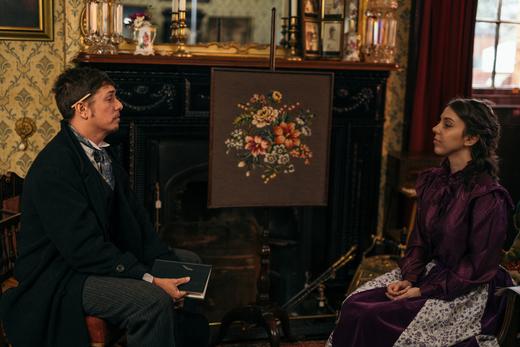 Costumes and props...
Earlier in the day, we’d visited Admiral Costumes in Little Horwood to hire the costumes. Miss Trent has a particular style of dress so, as I’d expected, it took us longer to find Sabrina’s costume. When we found the purple and cream skirt with the matching blouse, though, both me and Sabrina knew at once it was a perfect match for the part. The comb she wears in the trailer is one I’d bought for a wedding. She styled her hair after a Victorian Era photograph and applied light make-up to remain true to the character.

Meanwhile, the only trouble we had with Daniel’s costume was finding a suitable jacket.  I’d always envisioned Mr Baldwin wearing a tweed jacket but when Daniel walked around the corner wearing the dark-grey one, I felt as if Mr Oswald Baldwin was stood before me.

The gallery below includes photographs taken at the costume fitting and on set: 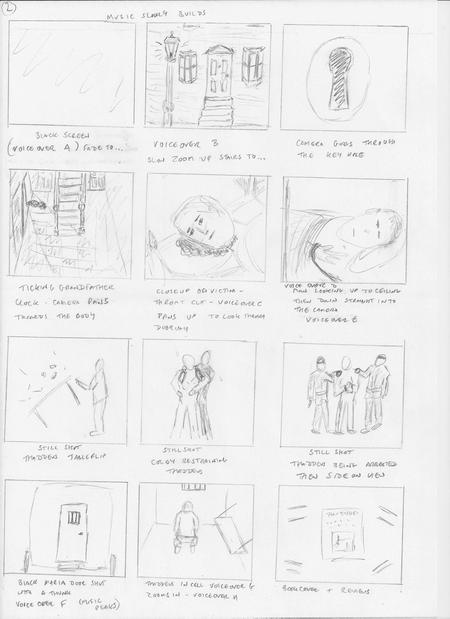 The script’s third draft was written alongside the creation of a storyboard with my friend and regular proof-reader and beta reader, Karen McDonald. The images above are the rough storyboard we created during the script redrafting. We made them with the Milton Keynes Museum’s Victorian parlour in mind as, by then, I knew I could hire the location for a reasonable amount.

Following this session, the script underwent the redrafting process a further four times before I was satisfied with it. By that point, the anonymous “JOURNALIST” I’d created in earlier drafts had become Mr Baldwin. A journalist at the Gaslight Gazette, Mr Baldwin is the colleague of Bow Street Society member, Mr Joseph Maxwell. His first appearance is in The Case of the Curious Client as a minor supporting character.

I decided to use Mr Baldwin instead of Mr Maxwell for several reasons. Firstly, I’m reluctant to provide my readers with illustrations/visuals of my characters as I want them to create their own version of the character in their minds. I think doing this may help a reader to form a better personal connection with the character. Secondly, Mr Maxwell’s clumsiness and unworldly personality wasn’t appropriate for the scene I had in mind. Thirdly, it wasn’t logical for Mr Maxwell—an existing Bow Street Society member—to question Miss Trent about the group and its members etc as he’s already aware of this from his investigative work with them.

Yet, despite the self-imposed rule I mentioned above about visuals of my characters, I knew Miss Rebecca Trent would have to feature in the trailer. Fans of the series will know that, as the Society’s clerk, she’s pivotal to its functioning successfully.

Improvisation and rehearsals...
I kept the script’s stage direction to a minimum as I wanted to give both actors the opportunity to put their own marks on the characters and the scene. At the last rehearsal before the book trailer was filmed, I spoke to Daniel Toal and Sabrina Poole about how they felt the project was going so far. Here’s their behind-the-scenes interview with footage of their rehearsal.  2019