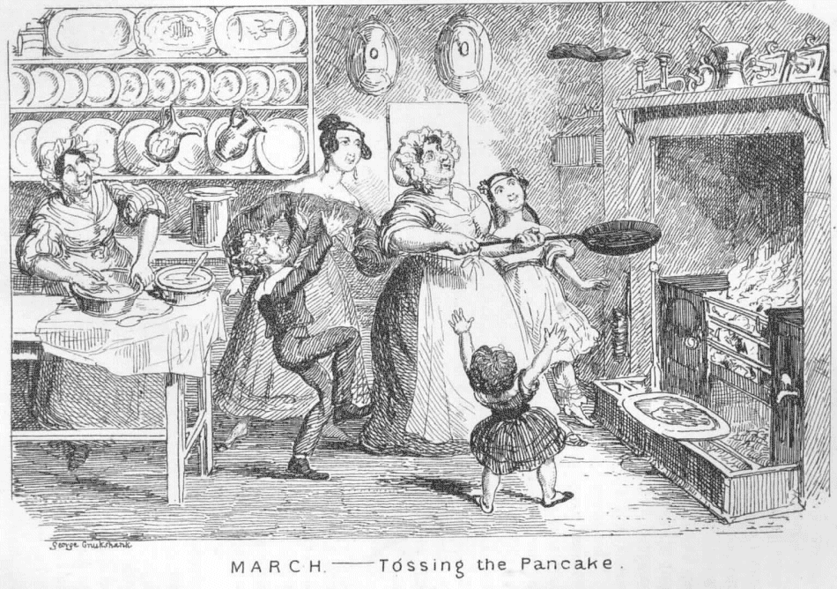 Personally, I have never liked the pancakes which are traditionally made for Shrove Tuesday. Like St Valentine’s Day, though, it has become an annual holiday that most consider “modern”. For many, the delight lies in the making of one (or several) of the aforementioned pancakes and witnessing the drama of flipping it in the pan with—often times—hilarious results. I remember many a Shrove Tuesday when the batter concoction ended its journey stuck to the kitchen’s ceiling. Yet, as the cartoon above from George Cruikshank's 'Comic Almanack' (1837) shows the Victorians were as enthralled with this practice as we are.

This isn’t surprising when one looks at the origins of this—somewhat eccentric—holiday. Held on the day before Ash Wednesday, Shrove Tuesday marks the last day before Christians begin Lent. According to Encyclopaedia Britannica, the term “Shrove” is derived from “Shrive”. This was “the confession of sins as preparation for Lent.” Encyclopaedia Britannica then goes on to explain that pancakes have become part of this day as a means of ensuring eggs, sugar, and fat aren’t wasted during Lent as these foodstuffs are “commonly forbidden during the Lenten fast.”

To mark Shrove Tuesday, and to celebrate the humble pancake, the Worshipful Company of Poulters hold an annual pancake race around the Guidhall Yard in London. Named the London Inter Livery Pancake Race, this event has been running for over 10 years. According to the website Calendar Customs: A guide to British calendar customs and local traditions each “of the participating trades have their own appropriate role in the proceedings, for example the Gunmakers start each race literally with a bang, Clockmakers time the heats and Fruiterers provide lemons to accompany the pancakes.” Proceeds from the race are donated to charity.

For the more adventurous and energetic pancake lover is the annual Shrovetide Football Game in Ashbourne, Derbyshire. The entire town becomes the playing area and locals play in two teams: those born on the river’s north side (“the Up'ards”)  and those born on the south (the “Down'ards”). The goals are set three miles apart and players score by tapping the ball three times against a marker board. It’s unclear exactly when the tradition began but it’s generally accepted the first surviving reference was by Charles Cotton in 1683. There’s also a popular theory the original “ball” was in fact a head tossed into the crowd following an execution. The game gained notoriety in the Victorian era when, in 1878, it was briefly banned after a man drowned in the Henmore. Local landowners also signed petitions and refused to allow the game to be played on their properties. You can read a more detailed account of this event on the BBC website here.

If you’ve never had a Shrove Tuesday pancake there are plenty of recipes online for you to try. This year, though, I’ll follow my own tradition and give these “sweet treats” a wide berth.

“The history of Royal Ashbourne Shrovetide Football” article on the BBC website, published at 15:14 GMT on Thursday 24th December 2009 http://www.bbc.co.uk/local/derby/hi/people_and_places/history/newsid_8322000/8322713.stm

A glimpse into the nineteenth century's "flipping" great holiday