Matthew Brockmeyer loves howling at the moon and drenching his fangs in human blood. He is the author of the critically-acclaimed, Amazon Bestselling horror novel KIND NEPENTHE: A Savage Tale of Terror Set in the Heart of California’s Marijuana Country. His stories have been featured in numerous publications, both in print and online, including, among others, Deciduous Tales, Infernal Ink, Shotgun Honey, Not One of Us, Timeless Tales Magazine, Body Parts, Pulp Metal Magazine and the anthologies The Edge: Infinite Darkness, After the Happily Ever After, One Hundred Word Horrors and One Hundred Voices. He lives deep in the forest in Northern California with his wife and two children.

I’d choose Bret Easton Ellis as my cellmate. He’s both brilliant and funny, terribly witty, and we have the same tastes in literature and film, so we’d have a lot to talk about. He loves to party, and since he’s so rich and hangs out with such a devious crowd, I’m sure he’d get lots of drugs and booze smuggled in, as well as all the best books.

As for books, I’d choose James Joyce’s Ulysses because it’s so long and difficult to decipher. You could read just a couple pages at a time for years and years. John Irving’s The World According to Garp says so much about humanity and is equal parts pathos, comedy and soul-crushing tragedy. Plus there’s short stories and novel excerpts in the body of the novel as well. So, that’s one I’d bring. Hmmm, I suppose Herman Melville’s Moby Dick. It’s really just a fun adventure story, but it’s literary enough that it would make a good impression on Bret. And I’d want some Shakespeare, but something light and lively that would be fun, so I guess A Midsummer Night’s Dream. Those who know me might be asking, what? No horror? Dude, I’m stuck in a jail cell with Bret Easton Ellis, I don’t need anymore horror in my life right now. Okay?

I guess I’d have Diesel Dan’s girlfriend Amber from my novel Kind Nepenthe visit me. She’s an outlaw speed freak who’d have no issues with sneaking me drugs. She’d probably also have some friends inside and could vouch for me. Get me in with the right people. I know Bret would probably have us covered; but, we’re going to need a lot of drugs. A lot.

Tracking down ​Matthew Brockmeyer after his escape: 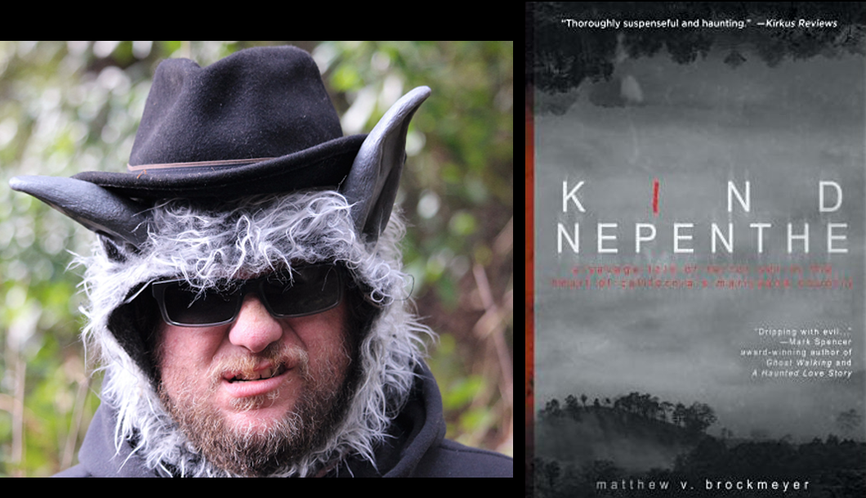