Nowadays we’re accustomed to seeing (at least) 30 minutes of adverts (aka commercials) for products and other movies when we go to the cinema. In the early to mid-twentieth century though cinema goers would be treated to a “B feature” in addition to the top billed film. They may have also seen a news reel and even a cartoon prior. I do have a vague memory of this set-up from when I went to the cinema as a young child. Then again, I could be remembering the scene in Who Framed Roger Rabbit? in which the titular Roger Rabbit and the private eye, Eddie Valiant (played by the late, great Bob Hoskins), are hiding out at the cinema and a news reel comes on after a cartoon. Regardless, there was a time when a cinema ticket got you a higher variety of viewing in one session than it does now.

One of the aforementioned “B features” was a series of 30 minute dramatisations based on the real-life cases of the Metropolitan Police—SCOTLAND YARD. Introduced and narrated by criminologist and author, Edgar Lustgarten, the series was made between 1953 and 1961 at Merton Park Studios. It was distributed by Anglo-Amalgamated Productions.  Prior to this, Mr Lustgarten had written the court room based novel One More Unfortunate  (1947) and Defender’s Triumph (1951). Aside from his writing and contribution to SCOTLAND YARD, Mr Lustgarten had seen his own share of ‘scandal’ in that—according to the International Movie Database (IMDb)—a young woman was found dead in his bath after committing suicide (it was thought she was a mistress he’d spurned). Mr Lustgarten was married to Joyce Goldstone from 1932 until her death in 1971. Mr Lustgarten himself died in 1978 aged 71 during a visit to London’s Marylebone Public Library.

The majority of the 39 SCOTLAND YARD episodes focused on cases investigated by Inspector Duggan. In the series the part was played by actor Russell Napier. Interestingly, Napier played the part of Inspector Harmer in one of the earlier episodes, The Dark Stairway. Napier’s other acting work includes the part of the Time Traveller in The Time Machine (1949) and Captain Stanley Lord in A Night To Remember (1958). The latter film also starred one of my all-time favourite actors, David McCallum, as Assistant Wireless Operator Harold Bride. Another cameo of note in SCOTLAND YARD is by Harry H. Corbett (who’d go on to play Harold in the legendary sitcom Steptoe and Son between 1962 and 1974) in one of the series’ last episodes, Wings of Death (1961).

I discovered the box set of SCOTLAND YARD by chance when I was browsing Amazon for obscure black and white crime movies I could buy with some vouchers I’d been given for my birthday. The fact the series had been shown in cinemas prior to the main feature did intrigue me. I’m ashamed to say the series sat in my cupboard for several months before I got around to watching it. When I eventually did I was pleasantly surprised. Each episode has been written in a matter-of-fact way while maintaining a high level of tension and drama.

The earlier episodes cite the year in which the events of the original case took place but this practise was abandoned as the series went on (presumably to protect the innocent who were involved). Forensic and medical techniques employed by the police at the time the cases were investigated are also featured prominently. Throughout each episode Mr Lustgarten guides the viewer through the case, explaining the significance of certain developments and helping to build the tension. Good old fashioned “leg work” is often portrayed as one of the Yard’s main stays in their arsenal against the criminal; “and so the leg work began” is a line Mr Lustgarten uses throughout the series. “Leg Work” being, of course, the drawn out—yet necessary—exercise of questioning neighbours and visiting various businesses until the right one is uncovered.

Overall the officers of Scotland Yard are portrayed as honest, hardworking men who will doggedly pursue a criminal until they are brought to justice. Allegations about police brutality, corruption, and institutional racism and sexism aren’t mentioned (despite these things having plagued the Met. since its formation in 1829). That being said, there is one uncomfortable conversation the police are having with the pathologist in which the pathologist describes the “characteristics” of someone who is “coloured”.  It was a scene I felt was too close to the knuckle.

Other “signs of the time” in which these episodes were made—but which weren’t necessarily negative—were a view of the newly opened—and deserted—motorway and the fact the inspector had a driver assigned to him. Workmen descending down a cliff face using no more than several lengths of rope and a pulley system, and sewer workers adorned in knee-length coats and berets when visiting the underground tunnels, were additional evidence of a more “relaxed” attitude to health and safety.

Considering when this series was made though I feel that, on balance, it manages to avoid the social and political pitfalls many films and television series of the time fell into.  Each episode is fascinating yet exciting, easy-to-watch (on the whole), and amusing at times. The introduction to the earlier episodes is particularly memorable due to the announcer dramatically shouting “SCOTLAND YARD!” every few seconds. My friends and I were having a drinking game while we watched this. Every time “Scotland Yard” was mentioned we had to drink. Interestingly, we drank three or four times in the first few minutes but then very little during the remainder of the episode.

To conclude, SCOTLAND YARD: The Complete Series is an enjoyable watch for those who like the film noir movies of the 1940s and 1950s and have an interest in true crime. If one bears in mind when the series was made then one may also find great enjoyment in the story telling and dramatisation of some truly fascinating cases. 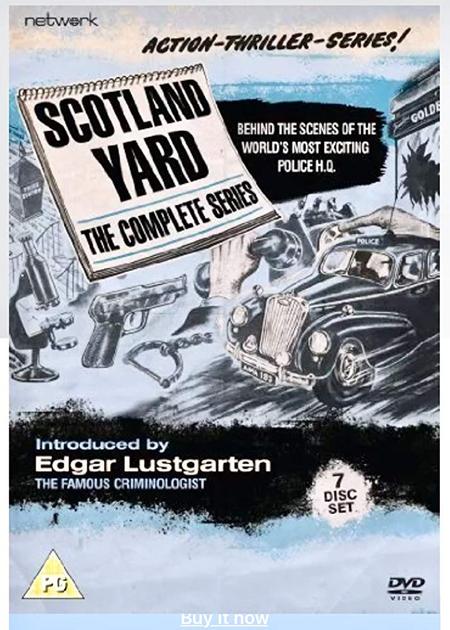