Fifty-Fourth Annual Report of the Registrar General of Births, Deaths and Marriages in England (1891) statistics:https://www.ons.gov.uk/aboutus/transparencyandgovernance/freedomofinformationfoi/tablesfromthefiftyfourthannualreportoftheregistrargeneralofbirthsdeathsandmarriagesinengland1891

As the nineteenth century went on photography became commonplace and soon commercial portrait photography became a viable second income for businesses and professionals to supplement their waning finances. For example, in The Case of the Curious Client Mr Lanford Glasgow has a photography business to supplement the income from his law firm. In 1890, the average life expectancy from birth in the UK was 45.78. According to the data in tables from the Fifty-Fourth Annual Report of the Registrar General of Births, Deaths and

It’s October; the spookiest month of the year! With this in mind I wanted to explore the darker side of the Victorian Era by looking at the practise of photographing the dead. Needless to say, then, this blog includes several mentions of death which some readers may find disturbing. If death and the documenting thereof are topics you find uncomfortable, I recommend you stop reading here. Otherwise, I hope you find the information in this blog as fascinating as I did when I researched it.

Marriages in England (1891), there were a total of 20.2 deaths per 1000 living in 1891. These two statistics are representative of the constant threats of disease, poor hygiene, and poor diet to the average person’s life toward the end of the nineteenth century (although it is an improving picture due to the government’s efforts at the time to prevent widespread disease in the densely populated cities). As a result of high death rates coupled with the improvements in photographic technology, it became commonplace for people to have portraits taken of their relatives after death.

It should be noted, though, that photographs depicting an adult under a sheet holding a baby/small child aren’t usually examples of memento mori portraits. I can only assume the adult beneath the sheet was the photographer’s assistant and therefore not related to the child being photographed. Thus, the parents who’d commissioned the portrait wouldn’t have wanted the assistant’s likeness in the portrait. Yet anyone who has ever tried to take a photograph of a young child will agree their constant movement can make it very difficult! On that lighter note I'd like to end this month's blog. There are plenty more articles about this fascinating topic on the internet so I'd definitely recommend looking into it further if you've enjoyed the blog. If not, let's never speak of this again.

Editorial note: The Atlas Obscura article 'Cleaning up some myths about Victorian 'post-mortem' photographs' argues that photographs using props (like the one shown above) actually depict living subjects. Whilst this may be true for this particular example (it's difficult to know for certain) I have based this article on photographs I've seen which depict subjects who are blatantly deceased. In other words, I've used the rule of 'if they look dead, they probably are'. I strive for accuracy in my blogs, though, which is why I thought it appropriate to direct my readers to the Atlas Obscura article linked above. 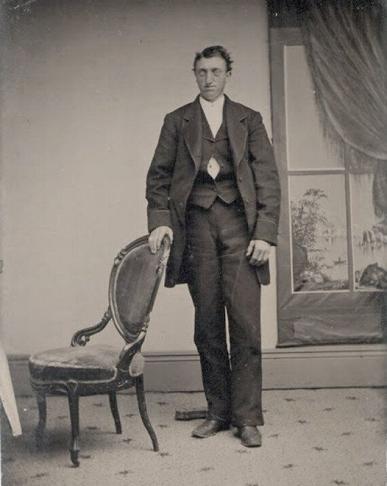 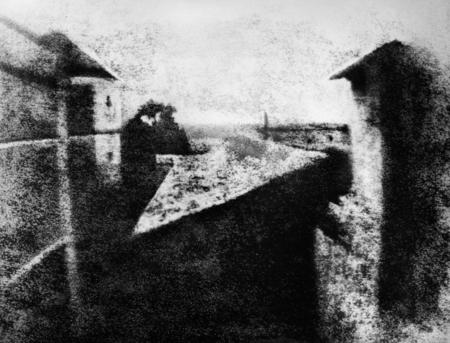 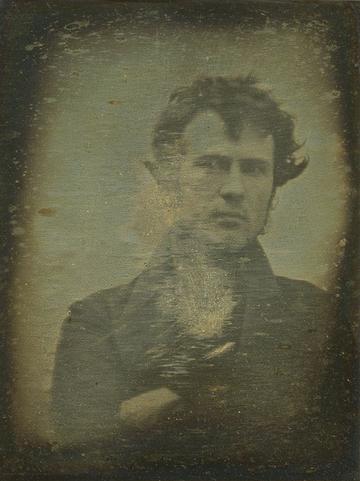 Above: Another example of a memento mori portrait. In this one you can see the base of the stand used to keep the deceased standing upright.

Above: Robert Cornelius’s self-portrait from 1839.

Above: An example of a memento mori portrait. The parents’ movement has made their likenesses blurred. The deceased daughter is in perfect focus, however.

Above: inventor Joseph Nicéphore Niépce’s photograph from 1826 or 1827. 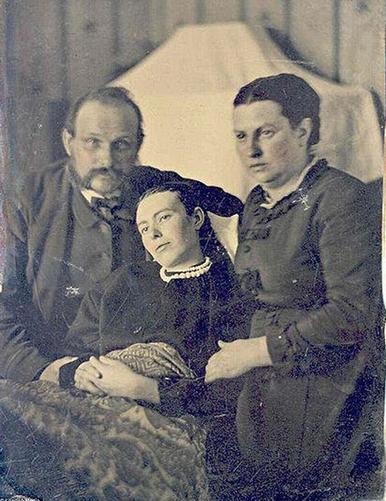 PHOTOGRAPHING THE DEAD IN THE VICTORIAN ERA

The deceased would be posed sitting in a chair or even standing. In most cases, a special brace was used to keep the deceased upright. This consisted of an angled wooden pole with a horseshoe-shaped attachment that rested against the base of the deceased’s skull. To further the illusion of life, photographers would also occasionally paint eyes on the deceased’s eyelids. As the century went on, this effort to mimic life was preferred over capturing a relative’s likeness whilst they were in their coffin. Children in particular were often posed as if they were sleeping either on a bed or in their mother’s arms.

In 1839, the amateur chemist and photography enthusiast Robert Cornelius captured what is, arguably, the first ever self-portrait at the back of his family store in Philadelphia, U.S.A. The first ever (surviving) photograph taken was captured in either 1826 or 1827 by the French inventor Joseph Nicéphore Niépce. It depicts the view from his window in Burgundy, France. According to the Metro UK website, he “snapped the shot with a camera obscura by focusing it onto a pewter plate, with the whole process taking him about eight hours.” When Mr Cornelius photographed his self-portrait over a decade later, it reportedly took a minute to capture his likeness. This stark contrast in time alone gives you a fair idea of how rapidly the technology had evolved during the intervening years.

Known as memento mori portraits (memento mori being the Latin for “remember you must die”), they were often the only time when a person’s likeness was captured.  Relatives would also pose alongside the deceased subject, usually sitting beside them. Although the idea of having one’s photograph taken with the body of one’s relative may be shocking to modern minds, it was not only normal in the nineteenth century but considered a good way to show one’s affection toward the deceased. Brothers were photographed side-by-side on sofas, daughters were photographed by parents, and parents photographed with their children.