The Writers' Wing would like to welcome its next inmate, mystery writer Saralyn Richard.

Award-winning mystery and children’s book author, Saralyn Richard, is a writer who teaches. Her children’s book, Naughty Nana, has reached thousands. Murder in the One Percent, first in the Detective Parrott Mystery series and winner of the Killer Nashville Silver Falchion Readers’ Choice 2019 award, pulls back the curtain on the privileged and powerful rich. Look for the sequel, A Palette for Love and Murder, in January, 2020. Saralyn has published stories, articles, and poems in various collections and magazines. A member of International Thriller Writers and Mystery Writers of America, Saralyn teaches creative writing and literature.

Who is your cellmate, and why?
It’s all a big mistake, I tell you! A case of mistaken identity. I was minding my own business, gathering information on the financial habits of the one percent, when suddenly a police officer showed up with a warrant and handcuffs! Here I sit, accused of misappropriation of funds from a trust account, restrained from my research and my writing, yearning to make bail, so I can meet my writing deadlines. It’s my character who committed the crime—not me!

At least I have a fascinating cellmate. His name is Red from the Shawshank Redemption. I like his style, and his stories have kept me entertained through a couple of cold and sleepless nights. Best of all, he has a great plan.

Which four books would you choose to pass the time with, and why?
I would start with A Prayer for Owen Meany by John Irving. I love all of Irving’s novels and all of his quirky characters, but I could read this book over and over again and find new bits of cleverness each time. Beneath Irving’s sometimes preposterous plot events lies an impressive bedrock of commentary about the absurdity of life and the relationships that make it all worthwhile.

The second book I would choose is Cutting for Stone by Abraham Verghese. Verhgese was a protegee of John Irving, and this book, while telling an amazing story of its own, can be read as a tribute to Irving’s body of work. Indeed, there are nods to Irving throughout that bring knowing smiles to those of us who catch them.

Next, I would re-read The Poisonwood Bible by Barbara Kingsolver. Kingsolver manages writing in multiple points of view more skillfully than any other writer I can think of. The family of a missionary in Africa during turbulent political times experiences many physical and emotional hardships and deprivations. We see these through different lenses, so the resulting picture is much like that of a kaleidoscope, sometimes beautiful, sometimes horrifying, but always changing.

Finally, I would read William Kent Krueger’s Ordinary Grace. This book nails it all. It’s a compelling mystery that unfolds itself with extraordinary wisdom at every turn. Its characters and the situations they are in are hauntingly familiar and yet fresh and fascinating.

I have hundreds of favorite books, so these are tough choices, but I know these four would help me pass the time until Red—uh, until my attorney can get me out of here.

Which one of your own literary creations would you choose to visit you, and why? ​
I would welcome a visit from my hero, Detective Oliver Parrott, who stands up to the not-so-friendly wealthy and powerful elite in Murder in the One Percent and its upcoming sequel, A Palette for Love and Murder. Parrott always has a lot to tell me, and I appreciate his strong moral compass and dedication to doing the right thing.

That said, while I’m tied up, so to speak, I think it would be fun to visit with the dearly departed billionaire playboy and former Secretary of the Treasury, Preston Phillips, from Murder in the One Percent. It’s been awhile since Preston and I have exchanged quips with one another, and I miss his charismatic presence and even his acerbic remarks. Besides that, Preston is easy on the eyes! 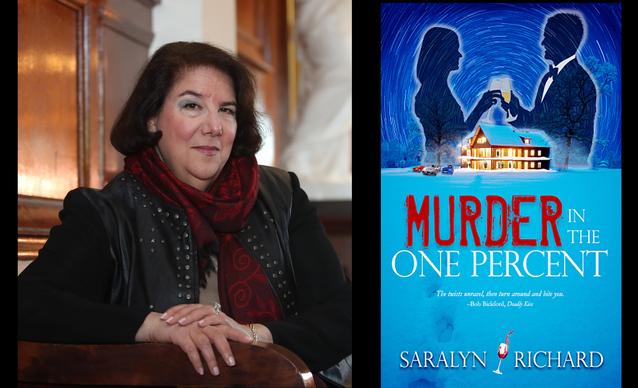 Tracking down Saralyn Richard after her escape:

BUY MURDER IN THE ONE PERCENT