In I started my chat with Anne by inviting her to tell me a little bit about herself:
I’m married to a fellow author. John writes historical thrillers, and we live in Cumbria. I’ve always loved detective fiction, especially vintage and Victorian. When I was young, I imagined being a crime author, but never seriously thought it could happen. I’m more of a dreamer than driven. A few years ago, I was diagnosed with Anxiety Disorder. Trying to write a novel seemed something positive to focus on. It did provide a real escape and writing became an important part of my life. I’m a great believer in the power of reading for promoting mental health – one reason why we need libraries. Books got many of us through lockdown.

What was the inspiration behind the character of Inspector Abbs?
Inspector Abbs wasn’t consciously inspired by anyone, real or literary. He simply seemed to turn up in my mind. I wanted a detective who’s astute and observant, a people-watcher who’s good at making connections. He cares about the down-trodden and is well-aware of his own failings. I like the idea that Victorian detectives had only their wits to rely on. Forensic help was in its infancy. They had to collect details, weigh up suspects and solve a case by cross-checking, knowledge of human nature and gut instinct.

Why did you choose the Victorian Era and specifically Norfolk and London for the  settings of   your books?
The Victorian era is interesting because it lasted so long. Those 64 years embraced so much change in every area, architecture, social mores, scientific discovery and so on. A wealth of aspects for a writer to use. I’m intrigued by the Victorian way of death, elaborate mourning rituals, garden cemeteries and the craze for spiritualism. I knew my first novel would be set in Devon, my old home, but wanted Abbs to be an outsider who’d transferred there. Two of my Victorian ancestors were in the County Police, so I knew (from family history research) they did transfer to different regions. We happened to be in Norfolk when I was first thinking up characters. A lovely, atmospheric county, it seemed right for my detective’s background. Abbs is a Norfolk surname, which I kept seeing on headstones and war memorials. Recreating London is probably the ultimate test for a  Victorian Era crime-writer. My first book began as a stand-alone but eventually, I felt my detectives should get to Scotland Yard.

It’s clear from reading Speak for the Dead that you have an intimate knowledge of the period, especially with regards to the language used by the characters. How did you  decide upon the level of detail included in the book? Also, in your opinion, how  important is it to get this right?
For me, it’s very important to get the level of detail right. When I read, it makes a major difference to how much I’m lost in a novel. I think readers, who enjoy historical fiction, want sufficient detail to be taken into another world. My favourite crime fiction has a strong sense of place, where the setting feels almost like another character. Having said that, too much detail slows the plot and doesn’t leave room for the reader to use their   imagination. No one wants to feel they’re wading through chunks of the author’s research, so writers have to find a balance. The same with language, too modern and  readers are jerked out of the world you’ve created. I don’t think we can accurately portray the way Victorians spoke either. Above all, we need to create a comfortable, flowing read.

If time travel were possible, would you return to the Victorian Era? What would you do or see whilst there?
Inspector Abbs lives in the St Pancreas district of London, as some of my forebears were there from the 1860s and I’d researched the area. I’d be fascinated to see what they were like and walk those streets.

What advice would you give something thinking about writing crime fiction set in the      Victorian Era?
As someone who’s been in umpteen messes, I’m wary of giving any advice. I’ve noticed many writers forget to include scents and smells in their descriptions. They really help bring a scene to life. Victorian London, especially, would have reeked, with many smells evocative of the seasons. Think of roast-chestnut sellers, choking fog, the acrid tang from vinegar-works, coffee-stalls, fried fish shops, lavender-girls, the stench of sewers and River Thames mud.

I’d like to thank Anne for taking the time to chat with me as I’m sure you found her answers as fascinating as I did. If you love the Bow Street Society books, you’re sure to fall in love with Anne’s Inspector Abbs books, too. Click on the buttons below to order your copy of Speak for the Dead from Amazon.co.uk and Amazon.com. Alternatively, search for ‘Anne Bainbridge Speak for the Dead’ in your usual Amazon marketplace.

Left: The cover of Speak for the Dead (An Inspector Abbs Victorian Mystery) by Anne Bainbridge. 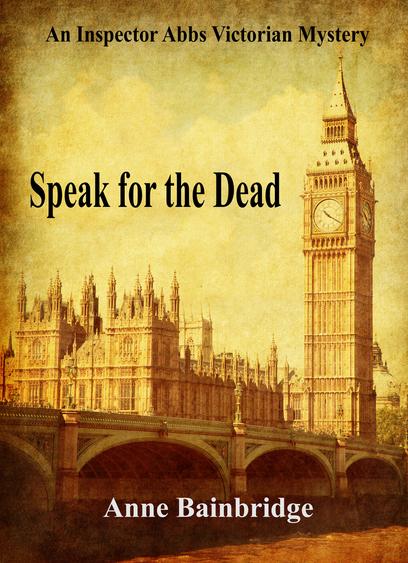 In this month’s blog I’m delighted to welcome fellow crime fiction author and lover of all things Victorian, Anne Bainbridge. I’ve been a tremendous fan of Anne’s writing since the first Inspector Abbs mystery, A Seaside Mourning, and have thoroughly enjoyed the latest book, Speak for the Dead. A highly talented writer,  Anne      effortlessly transports the reader back to the era through her seamless prose, intriguing characters, true-to-life    settings, and gripping mysteries. If you haven’t read her books, I strongly recommend that you do.  Speak for the Dead is available to buy as both an eBook and paperback from your usual Amazon  marketplace.

SPEAKING TO THE DEAD WITH ANNE BAINBRIDGE