The Writers' Wing is a cell block where crime, thriller, mystery, horror, true crime nonfiction, and suspense authors are invited to imagine themselves as inmates in a fictional prison while answering three questions.

The Writers' Wing would like to welcome its next inmate, Feminist Noir author W.E. DeVore.

W.E. DeVore is a musician, producer, and audio engineer. In her career as a musician and sometimes rock star babysitter, she has been fortunate to know some of the most entertaining and unique individuals that seem to only grow from the Louisiana soil. She’s also experienced some things that a nice Jewish girl from Montana probably shouldn’t know about - but it does make excellent fodder for a little fiction. DeVore has lived in Southeast Louisiana for the last two decades and currently lives in Baton Rouge, although her heart will always be in New Orleans - sweaty, dirty, crime-ridden, music-filled wonderland that it is.

The first three books of the Clementine Toledano Mysteries are available now (That Old Devil Sin, Devil Take Me Down, and Chasing Those Devil Bones). The fourth installment of Q’s misadventures, The Devil’s Luck, is due out Summer 2018.

Veronica Mars. I love her snarky wit and her toughness. She could handle herself in the prison yard and would be a good partner in an escape attempt. So, an ideal cellmate, am I right?

The humor-tinged darkness of her character has always fascinated me. I love that she was written as if she were a P.I. in a Raymond Chandler book. It opened up a myriad of possibilities when I began writing my own noir series, the Clementine Toledano Mysteries: classic noir imbued with modern feminism, which I’ve labeled ‘Feminist Noir.’

Until Veronica Mars, hardboiled noir was extremely misogynistic. Dashiell Hammett flipped the script for a moment with Nora Charles, in the Thin Man, but I don’t think it was until Rob Thomas created a teenaged girl with the same sensibilities as Sam Spade, that women really gained access to that world; busting out of the roles of Femme Fatale or Hookers with a Heart of Gold, and getting to finally put their feet up on the detective’s desk.

Foucault’s Pendulum, by Umberto Eco. This is my all-time favorite book, and I have read my copy so many times that it’s losing pages. The humorous misadventures of three bored editors concocting a conspiracy theory so far-fetched that it actually stumbles upon the truth never gets old. Also, Eco’s use of language is second to none. Without giving too much away, the scene inside the Pendulum is one of the most evocative moments of sheer terror that I’ve ever read. It’s utterly brilliant.

Dune, by Frank Herbert. Another marvelous creation that I could read again and again. The combination of delicious writing and a detailed universe captivates me. It takes a lot of skill to draw a fictional world with so much detail, and I’m in awe of it every time I read this book. I’ve also taken to using the liturgy against fear by the Bene Gesserit in my own life and have found it very grounding, which could come in handy being locked up in the pen.

Life, by Keith Richards. Beyond the incredibly entertaining recollections of the misadventures of being a Rolling Stone, the thing that gets me about this book is its use of language. It’s always been a pet peeve of mine to hear non-musicians describe what being a musician or playing music feels like. It’s always so melodramatic and romanticized. Richards cuts through all that BS and describes what it’s really like to record an album or go on tour, and it’s very refreshing. This is something I try to do in my books as well.

And last, Devil Take Me Down, which is the second book in my Clementine Toledano series. The opening chapter takes place during Southern Decadence (gay Mardi Gras) in New Orleans. I struggled for months to capture the energy of the French Quarter in those opening moments of the book and even when I read now, I long to go for a walk down Dauphine street in my old neighborhood. It also has some pretty thrilling sex scenes and a crazy plot twist in the middle that still makes me gasp, so it wouldn’t get old.

Not much of a competition for this one: Derek Sharp. He willed himself into creation in the second chapter of Devil Take Me Down, forcing me off my outline, and has since refused to leave me alone. I’d originally intended him to be the larger-than-life rock god who would cut a path of aggravation and destruction through my heroine’s life and then vanish, never to be seen or heard from again, but he’s just too much damned fun to write.  In addition to be incredibly charming, he’s also extremely kind underneath that mask he wears to hide himself from his rabid fans. Writing him into Chasing Those Devil Bones, the third book in the series, enriched Q’s world so much, that he became a central character in The Devil’s Luck, which will be coming out this summer.

I recently heard an interview with Dean Koontz where he described his writing process. He discussed letting the characters and the world you’ve created take you where they want to go, because sometimes it’s so much better than what you had planned. Derek Sharp was the teacher of that lesson for me. He taught me to trust the characters to tell me their story because when you really get inside their heads, they’ll guide you exactly where they need to go. 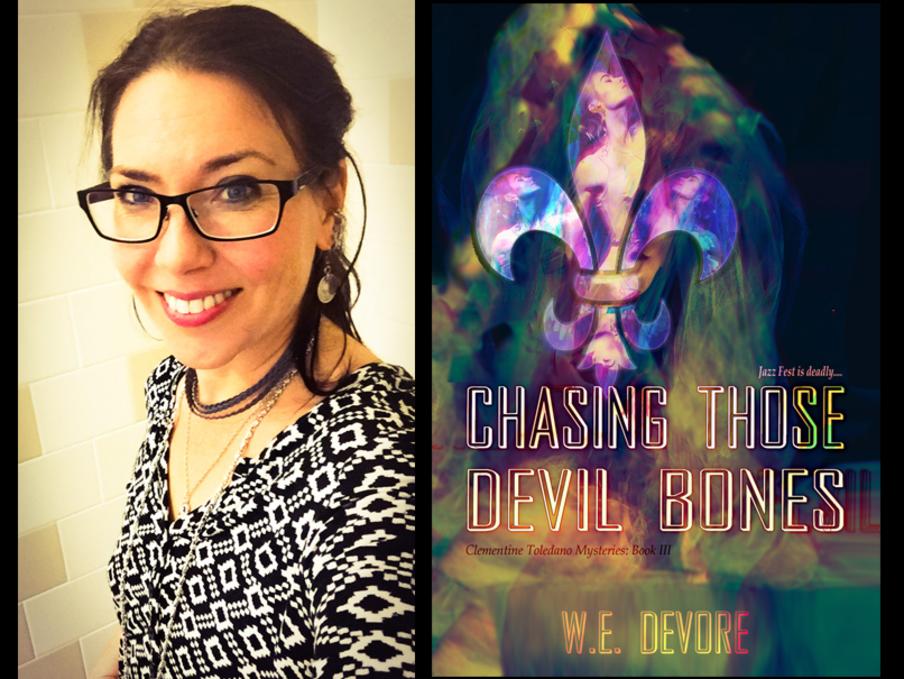 Tracking down W.E. DeVore  after her escape: