from a blind person’s point of view, though, I received very few contributions. Personally, I think this suggested a lack of understanding around blindness and visual impairment rather than anything more sinister. Therefore, I thought it might be useful to give my insight into this area, both from personal experience and from speaking to others who are in a similar situation. There are several aspects which should be considered before attempting to write for a blind or visually impaired character.

1) Define the character’s degree of blindness/visual impairment
According to the NHS website there are currently 2 million people living with sight loss in the UK. The term “sight loss” doesn’t automatically equate to “blindness”, however. In fact, very few people are actually blind. In order to determine how much sight loss your character has you need to first determine its cause. For example, some people are born blind. Others, like me, have a degenerative eye condition that means their sight worsens as time goes on. The nature of this sight loss depends on the condition. In my case, I have no peripheral vision and I’m night blind due to the light receptors on the back of my eye being affected by the condition. There are also certain conditions which may be caused by sight loss. Charles Bonnet Syndrome is a typical example. Those who have it experience hallucinations caused by their brain trying to fill in the gaps caused by their sight loss.

2) Blind/severely visually impaired people adapt
There’s a common (unintended) misconception that those who are blind or severely visually impaired can’t function without someone physically guiding them or describing everything to them. Whilst it is true those with sight loss rely more on others, most can still live independent lives. Modern technology such as alarms for cups, talking microwaves, bar codes and readers for clothes etc mean they don’t always need someone there. Yet, even without the assistance of technology, people with sight loss are very adept at finding other ways to adapt. For example, running a finger along a wall to tell them when they’ve reached a door or the end of a corridor. Also, the remaining senses of a person with sight loss can strengthen in order to compensate. It’s said John Fielding could identify over 1,000 criminals by their voice alone.

3) Sight loss should never define a character
Often times in stories, the blind character is known for their impairment alone. They’re given little more depth beyond this. As with religion, ethnicity, sexual orientation etc, a person’s blindness is just one element of who they are as a rounded individual. Sight loss doesn’t automatically mean a person can’t have a successful career, family, active social life, etc. Where possible always write about the character as a person who happens to be blind rather than a blind person who happens to be a character.

4) Don’t be afraid to ask
Personally, I prefer it when people ask me questions about my sight loss as it gives me the opportunity to increase their awareness of my condition. Sometimes, people hear the terms “blind” and “sight loss” and automatically feel the need to grab hold of your arm to guide you. Similarly, others hear the term “sight loss” and assume you just have a lazy eye because all they can see is the glasses you’re wearing. Often, sight loss is a hidden disability. If we were to meet in person, I doubt you’d be able to tell I had sight loss simply by looking at me. I don’t have a stick, a dog, or sunglasses. Therefore, please don’t be afraid to ask those living with sight loss to tell you what their lives are like and about their eye condition. Ultimately, it will make your character more realistic and well-rounded. In terms of media representations of people with sight loss, I would highly recommend the channel 4 docudrama City of Vice (2008) and the little-known BBC crime drama Second Sight (1999).


I hope the above has helped answer a few questions you may have had about sight loss and it’s given you the confidence to include such characters in your writing. If you have any further questions, please don’t hesitate to get in touch by emailing me at info@bowstreetsociety.com. Otherwise, I wish you happy writing!

During my visit to the Bow Street Police Museum in June my friend and I read about the magistrate John Fielding, otherwise known as the Blind Beak of Bow Street. She remarked to he clearly hadn’t allowed his impairment to hinder his career and how I had done the same. Although I’m not blind my vision is severely impaired.

Painting of Sir John Fielding by Nathaniel Hone the Elder  from the National Portrait Gallery. The black headband was used to signify Fielding’s blindness to others. 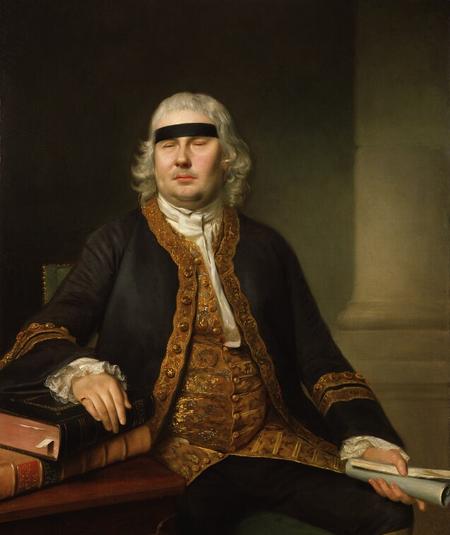