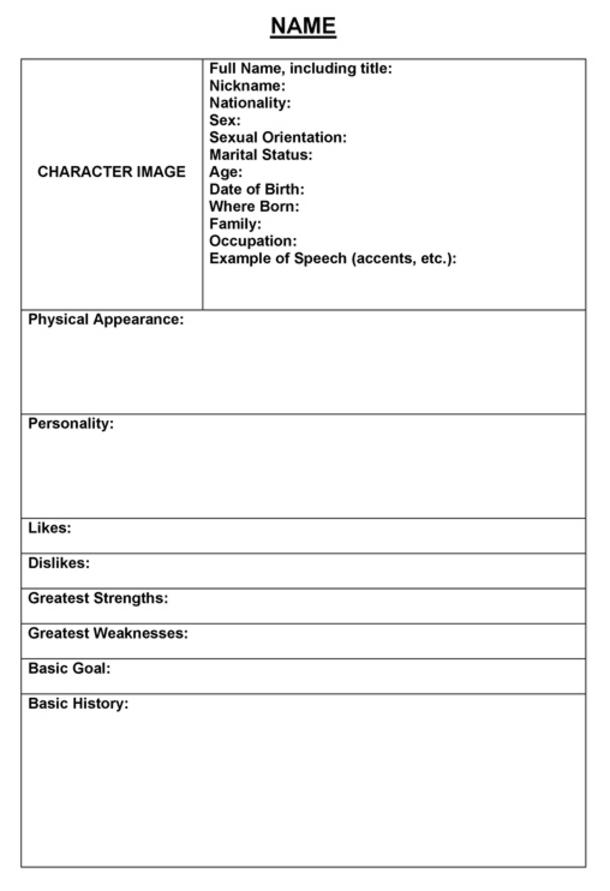 The ​Once you’ve completed the initial template, you should have a good idea of what your character is like. If you’re struggling for inspiration, though, consider the people you know in your own life. Whilst I’d advise against writing a carbon copy of a friend or family member, etc., I’d recommend thinking about the habits, personalities, etc of the people you know and cherry-picking different characteristics to funnel into your fictional person. For example, does your best friend have a particular word or phrase they’ll often say? Is your sister obsessed with neatness? Does your co-worker have a gorgeous chin?

By drawing on different characteristics of the people we know, we are also creating “markers” for particular traits in our fictional people which will help us remember them later. For example, if you’ve based your character’s tendency to use the word “outrageous” a lot on your best friend, then simply reminding yourself that the inspiration for your character was your best should remind you to put in the occasional “outrageous” into your character’s dialogue.

I know others have found it useful to do writing exercises to get to know their characters. For instance, the handbag/suitcase exercise, whereby you ponder your character’s lifestyle, habits, etc., by describing their possessions. Personally, I’ve found this sort of exercise interesting but ultimately useless. Mainly because I haven’t felt the need to describe the contents of my character’s handbag or suitcase in my work (so far).

Getting to know you…

As with real people, you can only truly get to know your characters by spending time with them. What I mean by this is twofold. Firstly, spend time thinking about your characters in different situations when you’re away from the computer. How would the character react in a situation like, for example, a crowded train? Would they stand by the doors? Would they feel comfortable, anxious, etc? If you’ve already got a scene in mind, place your character in it, consider the various ways the scene could unfold, and analyse how your character would act/speak etc within those various possibilities.

Secondly, write. The more time you spend with your character within your imagination, the more vivid they will become. You can only do this by writing about them. This is because, as you’re writing, you’re making decisions (whether consciously or not) about the character at every turn. Slowly, you will build a strong picture of the character in your mind. Eventually, you will know the character so well, you’ll be able to write for them on an instinctual level. Once you’ve reached this point, you’ll be able to instantly recognise when your character is doing or saying something that’s, well, completely out of character! It’s worth noting that it’s at this stage of the writing process when you may feel like your characters are changing the story/making the decisions for you.

Drama is the driving force of development

As with life, characters grow and learn with each new drama or conflict they face. Even if your character learns nothing from the conflict they’ve been thrust into, this is still part of their development in both your mind and the reader’s. Change in plot, setting, and relationships should all have an impact on your character if they are directly involved. For example, in The Case of the Maxwell Murder, Mr Snyder’s relationships with his fellow Society members is put to the test due to the drama he’s suddenly thrust into. Given that Mr Snyder is essentially a gentle soul, he doesn’t take offense to how his fellow members are treating him. Instead, he is happy to do whatever he can to help because he considers them all his friends and so understands they’re only doing their jobs as detectives.

All updates to a character’s situation (financial, domestic etc.,), relationships (marriage, widowed, friendships), etc., should all be added to their character profile. Even mentions of basic information, such as the fact your character is left-handed, should be included. You’ll never be able to remember everything about your characters all of the time, and you’re not expected to. The character profiles should be your bible and your first point of call when writing about a particular character, especially if the character is a recurrent one in a series.


NEXT MONTH: The Importance of Time and Place

Welcome to part 2 of this series that explains what my typical process is when writing a book. As with part 1, I’ll be focusing on the practical techniques and tools I’ve learnt in the hope it will help others begin their writing journeys. This segment covers character creation and development and includes a character profile template that I’m happy for others to save and use.

If you have a question that isn’t covered in any of these segments, feel free to send me a direct message on either Twitter, Instagram, or Facebook. I’m also happy for you to email me directly at info@bowstreetsociety.com. I’ll be announcing new segments in this series in the Gaslight Gazette as well, so be sure to subscribe if you don’t already.

Before I even get to the nitty-gritty of my characters’ names, appearances, etc., I decide where I’m going to place them in the story. For example, will the character be the victim, the murderer, a suspect, witness, or a new member of the Bow Street Society? The purpose I have in mind for the character always informs the process of their creation and development. As it’s the most common character type in my books, I’m going to focus on a new Bow Street Society member, specifically Mr Samuel Snyder.

Due to the fact the Society’s members use the knowledge and skills they’ve acquired from their usual occupation to solve the cases they’re investigating, a character’s occupation is usually what I decide upon first. In Mr Snyder’s case, I decided upon a cab driver because it would give the character ample opportunity to eavesdrop on suspects. Furthermore, cab drivers traditionally have encyclopaedic knowledge of London’s streets. Therefore, I knew the character could draw upon this knowledge when directing other members or describing a particular location.

What’s in a name?

My books are set in the Victorian Era, a period when social class was more rigidly defined and held in higher regard than it (arguably) is now. Thus, I have to consider a character’s social class before choosing their name. In Mr Snyder’s case, I knew from my research into cabmen in the Victorian Era that most belonged to the working classes. Therefore, I bore this in mind when choosing his name.

Unless I’ve heard a name I like elsewhere, I’ll usually use the Random Renamer tool on www.behindthename.com to generate several potential names. These results are based upon the character’s nationality and gender (which are options one can choose on the renamer). Surnames can also be autogenerated from the website’s sister site, Behind the Surname. Samuel Snyder was simply one of the results which came up that I thought best suited my vision of the character.

As touched upon above, I conduct research into the occupation of my characters. In fact, my research is organised by character on my computer to allow me to keep better track of it. In Mr Snyder’s case my initial research consisted of contemporary sources about the character of cabmen and the purchasing, maintaining & licensing of cabs & carriages. I also purchased several maps of London which showed the streets, social class of the residents, tram lines, and railway lines. Finally, more “mundane” topics, such as omnibus, railway, and tram timetables & routes were also researched.

The below is the template I’ve followed for the creation of all my characters, including temporary characters, e.g., victims, suspects etc. The headings cover the basic information I need to form a rounded idea of the character in my mind. It’s important to bear in mind that these headings aren’t exhaustive. You will add more with each new piece of writing your character appears in. The character profile should be a fluid document that is constantly being updated and tweaked to reflect the decisions you’ve made for, and the life events you’ve given, your character.​ 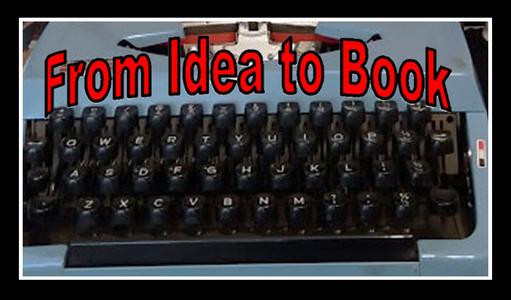