To celebrate the release of the 6th Bow Street Society Mystery, The Case of The Pugilist’s Ploy, this month’s blog is an exploration of the fascinating world of Victorian Era slang and phrase. The language associated with boxing is particularly interesting as some phrases have entered general use, whilst others are still used in boxing today. To discover more, please check out my blog from February 2021: Up to Scratch: 5 Facts about Bare-Knuckle Boxing in the Victorian Era.

Scratch. The line/mark in the centre of the ring where the fighters would meet at the commencement of a fight/round. The well-known phrase up to scratch is derived from a rule whereby the fighters had to return to the ring’s centre following the break between rounds. Failure to do so could result in their opponent being declared the victor.

Set-to. Boxing match. This is derived from the fighters being set to the scratch by their seconds.

Second. Derived from the Latin, secundus, with its origins in duelling. In those circumstances, the second was the representative of the principle (dueller) who carried the challenge, selected the ground, ensured the weapons were in order, and was responsible for all arrangements. A second in boxing is similar in that they are the representative and support of the fighter.

Bottle-holder. A provider of moral support to the fighter in the form of wiping off blood from their face, offering water from a bottle, and generally encouraging the fighter to continue and win.

Have a turn. General term for a bout of fisticuffs. An example of its use would be, “I’d like to have a turn with him.”

Knock-out. A disabling blow made out of guard on the chin that puts the receiver to sleep, thereby finishing the fight.

Permanent pug. The term given to a fighting man positioned at the door of the premises. A modern-day comparison could be a bouncer at a night club or pub.


I hope you’ve enjoyed this brief wander through the world of Victorian Era boxing. If it’s whetted your appetite for more, please check out my blog from February 2021 (see link above) and the 6th Bow Street Society Mystery, The Case of The Pugilist’s Ploy that is available now from your usual Amazon marketplace.

A massive thank you for supporting me in my writing journey, I wouldn’t be where I am without you. Have a merry Christmas and a wonderful New Year!

FROM PUGS TO PUNCHES:

The Language of Victorian Era Boxing 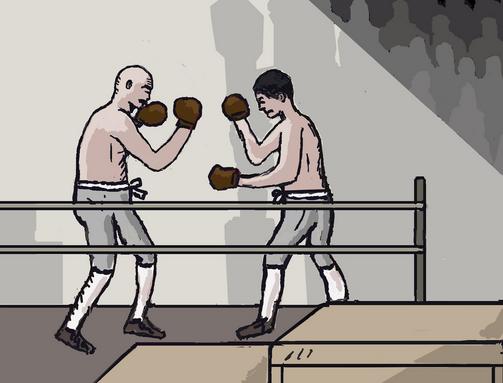